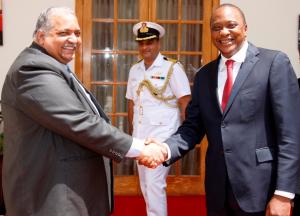 Kenyatta who bade farewell to the outgoing Indian High Commissioner to Kenya, Ambassador Sibabrata Tripathi, said many Kenyans and East Africans spend a lot of money seeking medical services outside the country.

“I appreciate the way we have worked together, the rapport you have had with my Government while on your tour of duty,” the President said in a statement issued in Nairobi after the meeting.

He said that he wants to see investors from India working together with Government in expanding special medical services.

Kenyatta noted that during Ambassador Tripathi’s tour of duty, the relations between the two countries greatly improved in trade and cultural ties.

The president’s remark came after the government promised to mobilize domestic resources through schemes such as taxation on luxury goods and creation of a trust fund for the vulnerable to expand access to quality healthcare.

Cabinet Secretary for Health, James Macharia said on March 18 that Kenya has borrowed best practices from Ghana, Ethiopia, India and Brazil to scale up health financing.

“We are exploring pathways based on lessons learned within Kenya and other countries with devolved health system to find appropriate mechanisms for raising adequate revenues for health services,” Macharia said at a high level forum on financing healthcare.

Policymakers and economists attending the forum agreed that Kenya must implement a raft of policy and legal incentives to encourage investments in the health sector.

On Monday, Kenyatta said cultural relations between the people of Kenya and India run deep and the two Governments need to strengthen and facilitate trade and investments.

“As government we will strengthen and facilitate trade and investments. Kenyans and Indians have strong cultural ties. Members of the Indian community in Kenya have been here, a number of them five generations. Some do not know India, they only know Kenya to be their home,” he said.

Speaking during the meeting, Tripathi whose tour of duty ends this week, thanked the government for the support it gave him saying he looked forward to see the initiatives he had launched come to conclusion.

The Indian envoy said he would encourage Indian investors to explore more opportunities in the agriculture, irrigation, tourism, education and financial services.