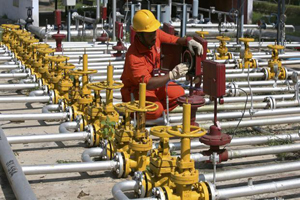 OVL, the overseas arm of the state explorer Oil and Natural Gas Corp (ONGC), teamed up with Oil India Ltd (OIL) to buy Videocon’s 10% stake in Mozambique’s Rovuma Area 1 for $2.475 billion. Subsequently, OVL on its own bought another 10% stake in the same field from Anadarko Petroleum Corp of the US for $2.64 billion.

The 10% stake of Videocon is currently split in 60:40 ratio and total payout for OVL for the back-to-back acquisitions is $4.125 billion. “For the Videocon acquisition, we raised a bridge finance (or short-term loan) of $1.5 billion. For purchase of Anadarko stake, we had raised a 5-year term loan of $1.775 billion and $725 million in bridge finance,” OVL managing director S.P. Garg said.

The bridge finances have to be repaid or replaced with a syndicated loan within one year-January 2015 for $1.5 billion raised for Videocon acquisition and February 2015 for $750 million of Anadarko purchase.

“We are exploring various options including raising funds through US dollar bonds and euro bonds market. We also have option of taking loan against sale of crude oil,” he said. In the oil-for-debt deal, the company will sell a portion of the future crude oil production to banks and financial institutions.

OVL in 2013-14 produced 5.491 million tonnes of crude oil from its various properties in countries from Russia to Venezuela. “At $100 a barrel oil prices, our projected output for next few years can get us about $4 billion from oil sales. But we also need money to fund our projects so what we are looking at is $500 to 700 million of loan from sale of crude oil,” Garg said.

The 3-to-5 year loan can be raised by selling future oil production from any of the company’s producing assets in Russia, Azerbaijan or Brazil.

OVL 27% in the BC-10 block in Brazil’s Campos Basin, 20% in Russia’s Sakhalin-1 project and 2.7% in the Azeri, Chirag and Guneshli group of oilfields in Azerbaijan. The remaining of the $2.225 billion fund OVL needs by February 2015 can be raised from US dollar and euro bond issues and syndicated loans.

Garg said the company for the first time in its history took to borrowings to fund its Mozambique acquisition. Previously, it got interest-free loans from its parent ONGC. But ONGC is not generating much surplus as its finances have been bogged down by the fuel subsidy that it provides to state refinery in form of hefty discount on oil sold to them.