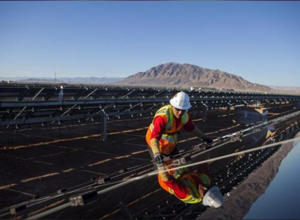 Sunny side up. That's how the BJP plans to serve its menu to satisfy India's hunger for energy, along with incentives for ramping up domestic production of coal, oil and gas.

Gujarat was the first state to announce incentives for solar projects in 2009, a year before UPA-2 launched the Jawaharlal Nehru National Solar Mission. Latest government data shows the state accounted for a third of the growth in green energy projects.

The Gujarat solar power experience is an inspiration for the party. Though the manifesto does not go into detail, we recognize different regions would require different solutions," BJP's energy advisor Narendra Taneja told TOI.

The manifesto also indicates giving power to people - a sort of swaraj - for remote, hilly regions by promising to build a network of small hydel projects.

The manifesto indicates the party's willingness to continue subsidies but target them better. That means pushing ahead with reforms such as market pricing of energy to spur investment and growth, while taking care of the poor through subsidy.

There is a clear stress on raising coal output, indicating the party would rather bank on building generation capacity on an abundantly available domestic fuel than chasing the uncertainty associated with availability of domestic gas.

The party promises to replicate throughout the country another success story from Gujarat by unifying the country through a national gas grid for equitable distribution of access to clean fuel. Under Modi, Gujarat was the first state to have planned and implemented a statewide gas pipeline network. It is also the only state in the country to own a blue chip oil and gas company.