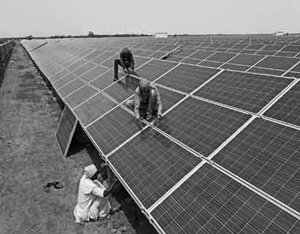 Solar technologies could be characterised as either passive solar or active solar depending on the way they capture, convert, and distribute solar energy. An active solar technique includes using photovoltaic panels and solar thermal collectors to harness the energy. A passive solar technique includes orienting a building to the sun, selecting materials with positive thermal mass or light dispersing properties, and designing buildings that naturally circulate air.

The 2011 report of International Energy Agency (IEA), stressed on the development of affordable, inexhaustible, and clean solar energy technologies (both active and passive) with large longer-term and global benefits. The IEA believed that the reliance on solar energy will increase countries’ energy security through reliance on an indigenous, inexhaustible and mostly import-independent resource. The solar energy use will also enhance sustainability, reduce pollution, lower the costs of mitigating climate change, and keep fossil fuel prices lower than otherwise. Thus, the additional costs of the incentives for early deployment should be considered learning investments and that they must be wisely spent and need to be widely shared. In view of the IEA suggestions, the potential for solar energy in India is huge.

India has extensive energy needs and increasing difficulty in meeting those needs through traditional means of power generation. In 2012, for example, the world’s largest blackout - the great Indian uutage, stretching from New Delhi to Kolkata, occurred. This blackout was due to failure of the northern power grid and caused nearly 700 million people, twice the population of the US, to be without electricity. In such a situation, India needs to shift to non-polluting renewable sources of energy to meet future demand for electricity. Solar is the prime inexhaustible energy available to all. And India is one of the sun’s most favoured nations, blessed with about 5,000 twh of solar insolation every year with most parts receiving 4-7 kwh per square per metre per day. Thus, investment in solar energy is a natural choice for India.

Considering the solar possibility, in 2009, India unveiled a $19 billion plan to produce 20 gw of solar power by 2020 (Jawaharlal Nehru National Solar Mission, or JNNSM). Under JNNSM, the use of solar-powered equipment and applications would be made compulsory in all government buildings, as well as hospitals and hotels. From August 2011 to July 2012, India has gone from 2.5 mw of grid connected solar photovoltaic to over 1,000 mw of the same power.

In fact, India’s energy under JNNSM is competitively placed among world players. For example, a report by World Bank titled, “Paving the Way for a Transformational Future: Lessons from JNNSM Phase 1,” says that JNNSM has been instrumental in bringing down the cost of solar power to a level that is competitive across the world. As per the report, JNNSM has reduced the costs of solar energy to $0.15 per kwh, making India amongst the lowest cost destinations for grid-connected solar photovoltaic in the world.

According to the World Bank report, solar power has the potential to reduce India’s dependence on imports of diesel and coal for power generation, reduce greenhouse gas emissions, and contribute to energy security. Ashish Khanna, lead energy specialist and one of the authors of the report says that growth in the solar sector will help India increase its share of clean energy and help meet its target of reducing emissions per unit of its GDP by 20-25 per cent by 2020 over 2005 levels.

However, at present solar power is costly compared with conventional sources of power (from coal and oil). Thus, what is crucially needed is a focused approach that works on promoting financing of solar projects by commercial banks, developing shared infrastructure facilities such as solar parks, and identifying comparative advantage of Indian manufacturing across the supply chain.

One way in which the proposed mechanism has already found success is via publicly developed infrastructure such as solar parks. For example, Gujarat has developed a solar park in Charanka (Patan district), which is now the largest solar park in Asia generating more than 850 mw of power through solar photovoltaic technology. As per the report, such public infrastructure facilities helps in developing critical infrastructure, including facilities for power transmission, roads and water, thereby ensuring the rapid development of solar projects as well as local employment generation. In addition, India’s plans to develop ultra-mega solar projects will help showcase the potential for large scale grid connected solar projects to the entire world, which would make India a leader in the solar renewable technology.