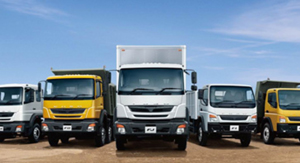 Initial targets lie at around 1,000 trucks this year for exports alone. With this move, the combined target of MFTBC and DICV is to double annual sales to 290,000 units by 2020. The first two products to be made in and exported from Chennai under the Fuso brand would be the 9-tonne light duty ‘FA’ model and the 25-tonne ‘FJ’ model. The Oragadam plant will manufacture five models spanning medium/heavy duty (25- to 49-tonne models named FJ, FO and FZ) and light/medium duty trucks (9- to 16 tonnes named FA and FI) under the Fuso brand and will initially export to 15 markets in Asia and Africa like Indonesia, Thailand, Malaysia, Tanzania, Malawi, Uganda, Zimbabwe, Mozambique, Mauritius and the Seychelles. The first launch markets will be Sri Lanka in June, followed by Bangladesh, Zambia, Kenya and Brunei later this year.

Dr Wolfgang Bernhard, Board of Management Member of Daimler AG responsible for Daimler Trucks and Daimler Buses, said: “Strategically, we are very well positioned with the Asia Business Model. The close network ties between MFTBC and DICV allow us to tap into important synergies, through which we can do business in new growth markets efficiently and grow profitably. Our customers benefit from this – through the right products, the best services and low total cost of ownership.”

Dr Albert Kirchmann, Head of Daimler Trucks Asia and MFTBC president & CEO, commented: “Today´s production start of a new generation of modern, robust and economical Fuso trucks that will be made in India for high-growth export markets is an important step in the implementation of the Asia Business Model.” Under the new Asia business model for Daimler, the two major production hubs in Kawasaki, Japan and Chennai will play an important role. The Kawasaki factory is positioned as the central CBU and CKD production hub and the Chennai plant will concentrate on truck deliveries of Mercedes-Benz and BharatBenz for India and export of Fuso trucks for select markets, thus complementing the Kawasaki hub’s capacity and the traditional product range.

Photographs: Daimler Trucks is starting immediate production of five new FUSO truck types at the DICV plant in Oragadam. These include 9-16-tonne medium-duty and 25-49-tonne models. The Fuso truck portfolio produced in India will be sold exclusively in export markets in Asia and Africa.