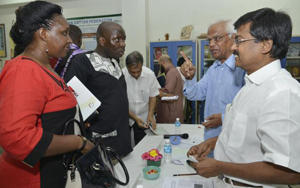 The Indian Cotton Federation (ICF) is keen on investing in Africa. A delegation of persons involved in the cotton business in Africa currently on a visit to the city has expressed interest in direct trade links between the two sides. Senior ICF officials said they too wanted to engage with their African counterparts directly.

Though India imports about 2.5 lakh tonne of cotton from Africa annually, the trade is almost entirely done through international merchants based in Europe. "We are interested in investing towards cotton development in Africa," said K N Viswanathan, vice president, ICF.

Members of the delegation from six African countries, who are on a visit to textile clusters in the country as part of WTO's cotton technical assistance programme, said lack of communication and misconceptions were hampering direct trade between the two sides.

"There is a lot of distortion by vested interests. You can come down and assist us (in cotton farming)," said Mubiru Richard, chairman, Textile Manufacturers' Association of Uganda. Almost the entire cotton from Africa is routed through large multi-national firms.

Late shipments, shade variation, contamination, lack of proper communication about nature of shipment and delays in presenting appropriate documents are some of the major concerns faced by textile mills importing cotton from Africa. "Shipments from Africa take up to 75 days to reach here," said P Nataraj, managing director, KPR Mill. This puts buyers in a fix as they are not in a position to adjust their procurement plans in tune with price fluctuations in the domestic market, he said.

A delegation comprising all the stakeholders from the textile industry in India would be visiting these African countries in the current year, said Milan Sharma, head, Africa Initiatives, IL&FS Cluster Development Initiative.