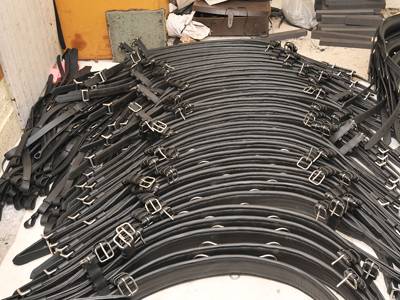 CHENNAI: India's leather exports are likely to grow 20 per cent at $6 billion by the end of the current fiscal, and may even touch $14-billion mark by the end of the 12th Five Year Plan, the Council for Leather Exports said. Leather exports are expected to rise by 20 per cent to $6 billion by end of the current fiscal, and the industry has a target to achieve $14 billion by 2016-17, Rajendra K Jalan, chairman, Council for Leather Exports.

After reaching an all-time high exports of $5 billion in 2012-13, exports in the first nine months of the current fiscal witnessed a 20 per cent growth, he said, adding as per current trends, the industry will be able to achieve $6-billion shipments by the end of FY 2013-14.

Earlier at the inauguration of the 29th edition of India International Leather Fair here, Jalan said, "We will undertake all efforts to reach this target, it is very important that we maintain the consistent growth level of 20 per cent and above in the coming years, despite the major challenges faced by the industry."

Setting up of infrastructure facilities to ramp up production and focus on the domestic market are some of the issues faced by the leather industry, he said.

The availability of leather will be a major factor which will decide the growth of this sector, he added.

"On the domestic front, India produces about 2 billion sqft of leather, but this is not enough," Jalan said.

"It is estimated that in order to achieve the export target of $14 billion by 2016-17, the industry requires an additional 4 billion square foot of leather. The question is how are we going to meet this huge requirement?" he said.

Council Director Ramesh Kumar expressed confidence in achieving the target and said that efforts were being made to reach the goal.

To augment the domestic leather supply, there is an urgent need to implement Zero Liquid Discharge (ZLD) in tanneries and also upgrade existing ZLD systems to meet "stringent" regulations of the Pollution Control Board, he added.

Ramesh Kumar said the industry needs government's help in this regard.

"The industry in Tamil Nadu has already submitted proposals to the Department of Industrial Policy and Promotion, seeking 50 per cent of the grant of about Rs 60 crore out of the estimated cost of Rs 120 crore for four ZLD projects in Ambur, Vaniyambadi and Pallavaram in Tamil Nadu", Ramesh Kumar said.

On production capacity, he said, China has been a dominant player in the leather industry with a huge chunk of about 30 per cent share.

India with only 3.05 per cent share in the global market needs to create new capacities and production centres of value added leather products, he said.

"In this context, though the Mega Leather Clusters Scheme notified by the government aims at creating new Green Field Production Clusters, it is requested that the land cost also be included under the scheme for consideration of grant," he said.

A senior official of CLE said it was because of this issue that the project supposed to come up in Perambalur district in Tamil Nadu was put on hold.

Noting that non-leather footwear industry has a 59 per cent share in exports from China and 44 per cent from Vietnam, Jalan said in this segment India's contribution is mere 1.65 per cent.

"We need to further enhance export of ladies footwear as this segment has a share of about 70 per cent in the global footwear market," he said.

On the domestic leather industry, Jalan said the market, which is presently about USD 5 billion, is expected to double in the next five years.

He said it was in this context that the Council has set up a separate cell by appointing an external agency to map the industry.

"CLE proposes to commission a study on leather and leather products, and already the request for proposal has already been floated. Seven companies have shown interest," he said.

The reason to engage an external agency was that out of the Rs 25,000-crore domestic market, the organised leather industry accounts for Rs 11,000 crore and the rest lies with the unorganised sector, Jalan said.

India is the third largest consumer of footwear in the world after China and the US, he said.