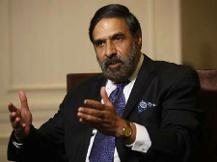 India on Tuesday expressed the hope that its bilateral trade with Africa will reach the targeted level of $100 billion by 2015.

"We will hopefully be reaching the trade target of $100 billion by 2015. It is a modest target," commerce and industry minister Anand Sharma said here. India-Africa trade, which stood at barely $5 billion a decade ago, was over $70 billion in 2012.

Sharma is here to attend the third India-Africa trade ministers meeting. He said that huge opportunities are there for businessmen of both the sides to enhance trade and investments.

Speaking at the occasion, African Union Commission Chairperson Nkosazana Dlamini Zuma too said that trade between India and Africa is growing exponentially during the past decade. "I agree with Mr Sharma that this is a modest trade target. India has emerged as the fourth largest trading partner," Zuma said.

She also said that both the sides can increase cooperation in areas like infrastructure and human resource development to enhance economic ties.

She expressed happiness over India's move to provide scholarships to 22,000 African students over the next three years.

South African trade minister Rob Davies said that both India and African should now focus on quality of trade.

On investments, he said that huge opportunities exists in both the regions.

On the forthcoming WTO ministerial meeting in Bali, Sharma expressed the hope for a successful outcome.

Zuma said: "We hope that interest of developing countries will be safeguarded particularly in food security and agriculture sector during the Bali meet". Africa's share in India's total trade has increased steadily and Africa now accounts for nearly 9 per cent of India's imports as compared to 3.5 per cent in 2005.