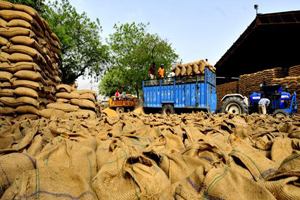 Rice shipments from India, the world’s largest producer after China, will probably expand to a record as buyers from Iran to Saudi Arabia boost purchases of aromatic basmati grain used in biryani and pilaf dishes.

Exports are set to increase 7.8% to 11 million metric tons in the 12 months through March from a year earlier, said MP Jindal, president of the All India Rice Exporters Association. Sales of basmati may jump 14% to 4 million tonnes as cargoes of non-basmati varieties advance 4 percent to 7 million tonnes, he said in a phone interview.

Shipments are increasing from India as Thailand, once the world’s biggest supplier, is also set to boost exports. The Southeast Asian country has built record stockpiles big enough to meet about a third of global import demand under a high-priced buying program that started in 2011. Farmers are demanding the government sell the stockpile to pay for their crops delivered last year.

"India has an edge over other countries because of quality and price competitiveness," said Faiyaz Hudani, an associate vice president at Kotak Commodity Services Ltd, a Mumbai-based broker. "When the output is high and the pace of growth is stable, there is no cause of concern."

The price of Thai 5% broken white rice, a benchmark grade, fell 23% in 2013, the most in at least five years, and was at $460 a ton yesterday. A slump to US$370 by March is possible as grain is offloaded from state granaries, according to Chareon Laothamatas, president of the Thai Rice Exporters Association. Rough-rice futures on the Chicago Board of Trade rose 0.6% to $15.625 per 100 pounds on Wednesday.

Thailand may not be able to find enough buyers for its stockpiles because major importers in Africa and the Philippines increasingly prefer grain from Vietnam and India, according to Darren Cooper, a senior economist at the council.

"Thailand will try to dispose of the stockpiles at whatever price it gets," said BV Krishna Rao, managing director of Pattabhi Agro Foods Pvt, an Indian exporter. Shipments may not be affected by rising Thai sales as the two countries catered to different markets, he said.

The United States Department of Agriculture expects Thai inventories to reach a record 14.7 million tonnes this year, compared with 6.1 million in 2010. Shipments will probably be 8.5 million tonnes, the USDA forecasts.

Basmati rice exports from India are climbing as Iran is building reserves, said Jindal at the exporters association. Sales to Iran jumped to 1.28 million tons in the nine months through December, exceeding the 1.07 million tonnes for whole of 2012 and 2013, according to the association. The country is India’s biggest buyer of basmati and imports 1.5 million tonnes annually.

"The price of basmati was good this year and overseas demand was more throughout the year from all countries including Iran and Saudi Arabia," Jindal said on Feb 4. "Exports to Iran are higher as it buys for keeping certain reserves."

India supplies 65% of the overseas basmati rice market, while Pakistan accounts for the rest, according to the state-run Agricultural and Processed Food Products Export Development Authority. Saudi Arabia and Iran are the two major buyers of Indian basmati, while Africa is a major destination for non-basmati varieties.