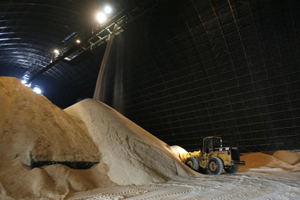 New Delhi: India, the world’s biggest sugar producer after Brazil, will consider increasing a subsidy on raw sweetener exports by 75% to boost shipments, according to two government officials with direct knowledge of the matter.

The cabinet will discuss paying Rs3,500 ($56) a ton as subsidy at a meeting on Thursday, more than Rs2,000 previously proposed by the food ministry, said the officials who asked not to be identified as the proposal was private.

The government will pay Rs1,400 crore over the next two years to export 4 million tons of sugar, they said. A part of the subsidy will be paid from state-run Sugar Development Fund and the rest will be borne by the finance ministry, they said.

N.C. Joshi, spokesman for the food ministry, declined to comment on the matter.

The subsidy of Rs2,000 a ton suggested by the food ministry is inadequate to boost exports as Indian raw sugar was about Rs4,000 more expensive than global prices, agriculture minister Sharad Pawar said in an interview on Wednesday.

A meeting of the cabinet on Tuesday deferred a decision on subsidy after Pawar demanded an increase in assistance to exporters, food minister K.V. Thomas said.