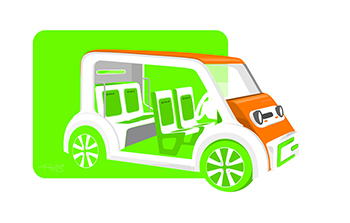 Birmingham City University is set to showcase the concept and design behind what could prove to be the world’s first affordable hydrogen fuel-cell powered mass transport vehicle.

In a partnership with UK motorsport entrepreneur and manufacturer Spencer Ashley and the DYPDC centre for automotive research in Pune, the University’s pioneering project will be unveiled in India later this week at the Auto Expo Motor Show.

In development since last Summer at Walsall-based manufacturer Spencer Ashley Ltd, the steer for the collaborative project stemmed from the Indian government’s Hydrogen Highway initiative which aims to ensure that at least 1 million hydrogen-fuelled vehicles hit the roads by 2020. The model, along with plans of a Fuel Cell Electric Vehicle (otherwise known as the ‘Millennium Tuk-Tuk’ hydrogen car), will be showcased at the event and could provide a primary mode of public transport in India in the future.

The joint collaborative project between the University, DYPDC and Spencer Ashley has been set up to produce a four-wheeled replacement for the abundant auto-rickshaw vehicle, affectionately known as the Tuk Tuk utility vehicle.

The powertrain for the new and innovative car which produces zero exhaust emissions, consists of a hydrogen fuel cell, an electric motor and a complex control system. Hydrogen for the vehicle is stored in a cluster of low pressure metal hydride cylinders, providing a safe means of fuelling the system. A thermal compressor retrieves the produced hydrogen by splitting water into its component elements - hydrogen and oxygen – via solar energy. Hydrogen storage cylinders can then be used to power equipment including mobile phones, computers and lighting in remote and developing areas or in a humanitarian disaster situation, as well as powering an electric vehicle.

Parmjit Chima, Head of the School of Engineering, Design and Manufacturing Systems at Birmingham City University, said: “With the current climate agenda of a low-carbon economy and the need to reduce greenhouse gas emissions and pollution, the way vehicles are reliant on fossil fuels needs to change.

“With an abundance of sunshine in India, we have also been developing a ‘Hydrogen Tree’™ concept with a simple and aesthetically elegant design which would be capable of charging multiple hydride stores to power not only vehicles but other appliances and devices too. This research into extracting and storing hydrogen is a real game-changer.”

The Auto Expo Motor Show attracts over 1 million visitors and is recognised as one of the major motor shows in the world. This year’s exhibition takes place in New Delhi from 7–11 February and sees participation from over 30 countries, including China, Germany, South Africa, USA and the United Kingdom.