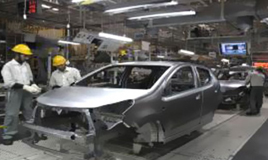 India has become an R&D hotbed and in keeping with the global R&D trend of last year, the country is now a preferred destination for automotive R&D, according to a study on the Global Top 500 R&D spenders done by Zinnov, a globalisation advisory and market expansion firm.

“With strong potential for growth in areas such as engineering analytics and significant talent located in the ‘Deccan Triangle’ region – encompassing Pune, Bangalore and Hyderabad – India is poised to become an auto R&D hub,” the study observed.

In particular, the automotive sector with its focus on creating differentiated offerings for global markets and appetite for investment, is an attractive industry. However, while cost arbitrage continues to be a key driver for R&D globalisation, there is a pressing need for Indian MNC R&D companies to take on big technology bets to drive innovation from here, according to Zinnov.

The study says that close to 50 per cent of the G500 companies present have over 10 per cent of the global R&D headcount in India. Zinnov announced the results of the study on the Global Top 500 R&D spenders, showing the Automotive industry’s leadership across sectors in R&D spend in 2013. It said that the Auto industry spent $110 billion globally last year, the highest among the Top 500 R&D spenders in the world.

Further, the automotive industry was also among the top three spenders in each region, across North America, Europe, APAC and Japan, with the total spend in the sector rising by 5 per cent over the previous year.

India's position is highlighted by the fact that 874 MNCs have set up 1,031 centres and 45 per cent of the top 500 global R&D spenders have a presence here. Of the auto R&D centres located in India, the highest – 26 – are headquartered in the EU. In fact, BMW is the only automotive company among the Top 50 R&D spenders that hasn’t yet entered India for R&D. And, out of the 26 companies whose global R&D spend has increased by over 20 per cent during the last year, only two in the auto sector - Porsche and Rolls-Royce – do not have an India presence. In fact, in the last five years, the automotive companies have shown growth leading to R&D intensity of almost of 6-7 per cent.

The released Zinnov study brings to light that within the automotive sector, Japan contributed to 40 per cent, followed by 37 per cent from Europe, 13 per cent from North America and 12 per cent from the Asia Pacific region. Volkswagen was the highest R&D spender demonstrating a 32 per cent increase over last year. Bosch increased its spend by 14 per cent.

Interestingly, China has the highest number of auto R&D centres, with 55. In comparison, India has 30 and the Bay Area in the US has 20. According to the report, the Top 500 R&D spenders contribute over USD 577 billion with the Top 100 R&D spenders alone contributing almost 66 per cent to the global R&D spend. 40 per cent of the overall R&D spend is from organisations headquartered in North America, followed by 34 per cent from Europe, 18 per cent from Japan, and 7 per cent from Asia-Pacific.