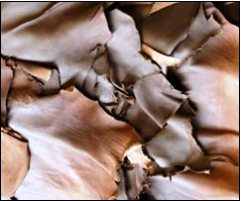 The exports of leather and leather products from India increased by 17.09 percent to US$ 3.786 billion during the first eight months of the ongoing financial year 2013-14, compared to exports of $3.233 billion made during the corresponding period of the previous fiscal, as per the export data officially notified by the Directorate General of Commercial Intelligence and Statistics (DGCI&S), Kolkata, under the Ministry of Commerce, Government of India.

In terms of value, the export of leather footwear fetched the highest earnings of $1.245 billion for India during the eight-month period, followed by leather goods which earned $880.39 million and finished leather with $852.74 million, according to the DGCI&S.

Country-wise, the major markets for Indian leather and leather products were Germany with a share of 12.58 percent, the UK with 11.36 percent, and the US with 11.30 percent. Italy, Hong Kong, France, Spain, Netherlands, China, Denmark, UAE and Belgium were other important markets. These 12 countries together accounted for nearly 76 percent of India’s total leather and leather products exports.