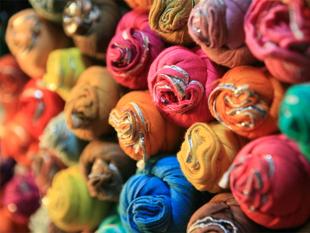 The first fair in the kitty is, Tex Trends India 2014, featuring over 380 exhibitors- displaying diverse range of products from the entire length and breadth of the country, is scheduled to be inaugurated by the Union Textiles Minister Dr. K S Rao on Monday.

Uppal was accompanied by Sudhir Sekhri, Chairman (EP) and H K L Magu Chairman (F & B), AEPC. Uppal shared the greetings with both, the Minister and the Secretary and briefed on the priorities that he would be taking during his two years of tenure.

Uppal in his statement said, "My immediate priority is to host the three most important domestic Fairs that are scheduled in the month of January 2014. The idea of holding these shows is to leverage the strengths and complementariness of Indiaâ€™s garment & textiles from fiber to fashion. The entire value chain has been brought under the ambit by organizing these three fairs. Fiber, Fabric, Fashion, accessories, etc will be brought under the single platform for manufacturer, traders & exporters. It will act as an exclusive rostrum for brand promotion, networking and business opportunity for national and international textile industries to show its visibility of the entire textile fraternity."

The other two Fairs includes: Source Zone and India Market Days. Textiles Minister has given his consent to inaugurate the Tex Trends India 2014 on 20th January 2014 at Pargati Maidan, New Delhi. With respect of the defined benefits to spurring manufacturing, empowering women & SMEs and employment generation, garment sector is critical for Indian economy, Chairman added.

Chairman AEPC, raised concern on the macroeconomic risks facing the Indian economy which have increased during the last six months, mainly on the dimensions of sliding domestic growth, rising input cost and slowdown in manufacturing and employment generation. Current account deficit and its non- disruptive financing have emerged as major challenges from the perspective of macroeconomic stability. Need of the time is to accelerate manufacturing which intern will spur growth and exports.

Briefing the Minister & the Secretary on the apparel exports growth, Chairman informed, "This is the last quarter of current fiscal and we have to strive harder in the last lap, so that we could meet the exports target set for us. The garment exports have been registering a positive growth since last 9 months.  RMG for the month of December 2013 has registered the growth of 17. 4 percent against the corresponding month of last financial year; export for April-December 2013-14 has increased by 16.3 percent in dollar terms."

Against a backdrop of worrisome global and domestic macroeconomic developments, Chairman AEPC, pressed for 5% duty credit scrip for the import of specialty fabrics not available in India on actual user basis. And, separate chapter for exports in the banking sector for availability of easy credit to industry. These two demands have tremendous potential to boost exports.

Chairman assured  the Minister that, AEPC would be working in the areas of  technology up gradation, skilling, innovation in terms of product and design, venturing into newer markets, along with the strengthening the compliance practices in garment trade.