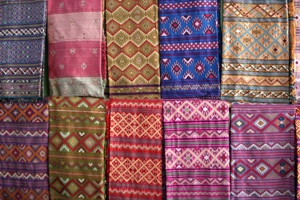 At the inauguration of Tex-Trends India 2014 on Monday, Mr. KS Rao, India’s Union Textiles Minister, announced that the government has set the target for textile exports in the 2014-15 financial year at US$60 billion. The Tex-Trends India 2014 textile show is a three-day event in New Delhi, and represents a joint initiative between India’s Ministry of Textiles and Ministry of Commerce & Industries.

“Next year, the textiles exports target will be US$60 billion, having seen the potential and concentrating on skill development in the country, focus on textile sector by the government and also the necessity of the advanced nations to depend entirely on Asia, especially China and India,” said Mr. Rao.

Though the target of US$60 billion would be an ambitious 30 percent jump from the current financial year’s target of US$43 billion, Mr. Rao expressed that it would not be difficult to reach that target by March 2015. Simply addressing issues of procedural clearances is expected to result in an 8 percent increase, and Mr. Rao assured that all procedural hurdles for exports would be cleared during his term.

According to figures released by the RBI, textile exports reached nearly US$14.9 billion in the first half of the current financial year 2013-2014. Ready-made garment exports accounted for almost half of that figure, at US$7.1 billion. Apparel exports experienced sustained growth of 15 percent over the last nine months from April to December 2013. Cumulative export data for the same period reveal an increase of 16.3 percent over the same period in the previous financial year, reaching US$10.56 billion.

India’s textile industry is one of the leading textile industries in the world, exporting to over 100 countries. It contributes a significant 17 percent to India’s overall export earnings and employs over 35 million people directly, making it the second largest source of employment after agriculture.