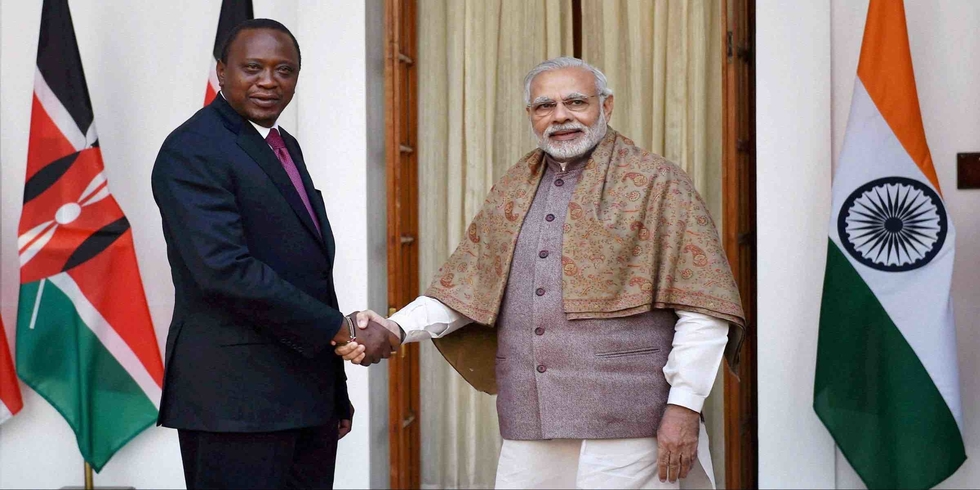 India's High Commission in Nairobi has stated that it is eager to expand commercial and investment ties with Kenya. This is because, behind China, it is the East African Community's second-largest import source.
"We want to expand bilateral trade, push investments into both Kenya and India, and make it easier for Kenyans to do business in India," said High Commissioner Virander Paul.
He talked at the inaugural "High Table with the High Commissioner" on East FM. According to Virander, there is significant untapped potential in agro-processing and value addition in Kenya, with opportunities for Kenyan enterprises and MSMEs to access into the Indian market. Medical, manufacturing, tourism, trade, and industries are other priority areas for India, according to him.
Renewed ties
Kenya has had a long-standing bilateral relationship with India. According to the High Commission, India and Kenya's current relationship has evolved into a strong and multi-faceted cooperation characterised by regular high-level visits, increased commerce and investment, and substantial people-to-people contacts.
When India's Prime Minister Narendra Modi visited Kenya in July 2016, he was promoting the two nations' long-standing trade and business ties. During the two-day visit, PM Modi and Kenyan President Uhuru Kenyatta discussed a wide variety of bilateral topics.
Seven Memorandums of Understanding were signed in the domains of defence, trade, and development assistance. The Prime Minister presented the Kenya Defence Forces with 30 field ambulances.
On the sidelines of the business event, five business-to-business MoUs were signed. Both leaders paid a visit to the 'India Innovation Pavilion,' where they were given a pamphlet on 'Doing Business in Kenya.' PM addressed a crowd of around 20,000 members of the Indian community in Nairobi.
President Kenyatta accompanied him for the diaspora meeting, which was significant. PM gave a special talk to a large group of students at the University of Nairobi and also paid a visit to the UN Office in Nairobi.
India has announced the gift of a state-of-the-art made-in-India cancer therapy machine, the Bhabhatron II, to Kenyatta National Hospital, as well as a $ 1 million (Sh113.7 million) grant for the refurbishment of the Mahatma Gandhi graduate library at the University of Nairobi, and the first-ever Festival of India in Kenya.
Six months later, on the invitation of Prime Minister Modi, President Uhuru Kenyatta travelled to India for a three-day state visit. The two leaders conducted official meetings in New Delhi during their visit. Several ministries, senior officials, and a high-level business group accompanied the President. In Delhi, he met with the President and Vice President, as well as attending a business forum.
"Key elements of the bilateral relationship were discussed," the High Commission explains, "including boosting cooperation in defence and marine security, enhancing trade and investment relationships, and counter-terrorism."
During the visit, a Memorandum of Understanding on Agriculture and Allied Sector Cooperation as well as a Letter of Credit for $100 million in agricultural mechanisation were inked. In October 2015, President Uhuru Kenyatta visited the 3rd India-Africa Forum Summit and met with Prime Minister Narendra Modi on a bilateral basis.
Trade and investment
According to the Kenya Investment Authority, India is Kenya's second largest investor (KenInvest). Over 60 large Indian corporations have made investments in a variety of industries, including manufacturing, real estate, pharmaceuticals, telecommunications, information technology, finance, and agriculture.
With pharmaceutical businesses having a significant presence in Kenya, Indian investments have resulted in the development of thousands of direct jobs for Kenyans. A bilateral Double Taxation Avoidance Agreement (DTAA) was signed in 1989, and a revised DTAA was signed in July 2016 and went into effect on August 30, 2017, making FDIs easier.
As a result of the pandemic's disruption, the value of trade between Kenya and its important economic partners fell by 4.7 percent in 2020. Kenya-India trade, on the other hand, increased, according to Kenya National Bureau of Statistics 2020 data. The total amount of commerce in the year to December was Sh2.283 trillion, down from Sh2.396 trillion in the previous year.
As the global supply chain was affected by the Covid-19 outbreak, the value of Chinese imports, Kenya's main source, fell slightly to Sh361.5 billion from Sh376.7 billion the previous year. The value of imports from India, Kenya's second largest source, increased by 5.4 percent to Sh188.6 billion. This was up from Sh178.9 billion the previous year, owing to an increase in pharmaceutical imports during the epidemic, for which India continues to be a major source.
According to official government figures, exports to India totaled Sh208.1 billion in the 11 months leading up to November last year. This is despite the fact that Kenya's domestic exports increased by 17% in the 11 months to November, led by food, fresh produce, and manufactured items.
Petroleum goods, pharmaceuticals, steel products, machinery, yarn, cars, and power transmission equipment are among the most common Indian exports to Kenya. Kenyan exports to India, on the other hand, include soda ash, vegetables, tea, leather, and metal waste.
Close cooperation between the Kenyan National Chamber of Commerce and Industry and its Indian equivalent, as well as other private sector organisations and governments, is expected to propel trade and investment between the two nations to new heights, as both economies seek to recover from the pandemic.
"As we build deeper bilateral ties between the two countries, we expect G2G (government to government), B2B, and Private sector to Private sector discussions to continue," Commissioner Virander stated.