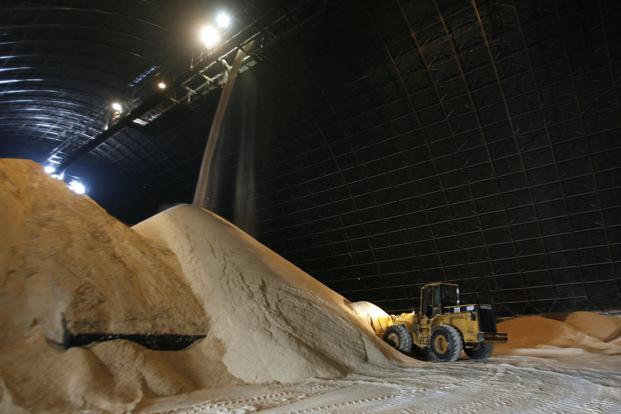 Mumbai/New Delhi: India could soon boost exports of raw sugar at the expense of top suppliers Brazil and Thailand as the government looks likely to give cash-strapped mills financial help for production so they can pay farmers.
India’s mills traditionally produce white sugar but a global glut has made exports difficult. A rise in sugar refining capacity in Asia and Africa has now given the country an opportunity to export raws.
But higher supplies of raw sugar from India, the world’s biggest consumer and second-largest producer of the sweetener, will put further pressure on global prices, which are currently hovering at a 3-1/2-year low.
Now, trade and government officials say New Delhi could announce tax breaks for mills as early as this week.
“Mills can offer discounts and seal export deals if the government provides them some kind of financial support for raw sugar production,” said Kamal Jain, managing director of Pune-based brokerage Kamal Jain Trading Services.
Subsidies for exports could attract the attention of the World Trade Organization (WTO) but government officials maintain that any incentives on production would not violate WTO rules.
High production costs for refined, or white, sugar because of government-set prices for cane squeeze companies if they export at big discounts. Stocks, meanwhile, are piling up in warehouses at mills as farmers have produced bumper cane crops.
In October, stocks totalled 8.8 million tonnes and this season, which runs to 30 September 2014, should see a fourth straight year of surplus production - and falling local prices.
This month, in a tortuous spiral of subsidies, the government agreed to give mills interest-free loans to help pay government-set prices to cane growers.
With tax breaks, mills would produce raw sugar, cutting their white sugar output and reducing stockpiles.
“Exports are unviable. Global sugar prices are falling and the rupee is becoming stronger. The government aid can make Indian raw sugar competitive in the world market,” said a Mumbai-based dealer with an international brokerage.
Global raw sugar prices have fallen 10% in the past two months, while the Indian rupee has risen a tenth after hitting a record low in August.
And India could find a buyer in Indonesia, the world’s top importer of raw sugar, which has just asked for 800,000 tonnes of raws for delivery up to February 2014.
“Indian mills are eyeing Indonesian demand, but there are many suppliers like Thailand and Brazil. Competition is tough,” said Ashwini Bansod, a senior analyst at Phillip Commodities India Pvt Ltd.
Up to now, only about 700,000 tonnes of raw sugar has been sold for export - despite hopes from the Indian Sugar Mills’ Association that as much as 4 million tonnes of sugar, mostly raws, could be sold in 2013/14.