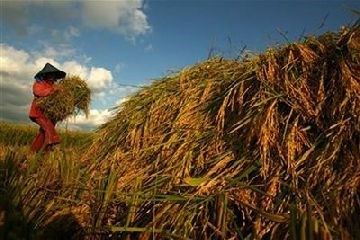 Indian traders are set to export a record 4 million tonnes of basmati rice in the year to March on higher demand for the premium grade from the Middle East, bringing total sales to about 10 million for a third straight year, sources said.

More supplies from India, which toppled Thailand in 2011/12 to become the world&#39;s top rice exporter, could further hit Thai benchmark prices that shed 3.4% over the past week amid bulging supplies at other key suppliers Thailand and Vietnam.

While New Delhi does not allow exports of the grain from government warehouses, private traders have annually sold about 10 million tonnes a year over the past two years.

"A lot of deals are taking place due to a spurt in demand. Other than some parts of Iran and Afghanistan, where you can find some basmati from Pakistan, India's basmati is in huge demand," said Setia, also a leading exporter.

India and Pakistan exclusively grow long-grain, aromatic basmati in the foothills of the Himalayas. The superior variety carries a premium over non-basmati, or common grades of rice.

Setia expects basmati rice sales to Iran, the top buyer of Indian rice, to remain steady at about 1.1 to 1.2 million tonnes in 2013/14 due to relatively higher government stockpiles there.

But a rise in demand from buyers such as Kuwait and Saudi Arabia would help India push 2013/14 exports of the premium grade to a record high, said Rajen Sundareshan, executive director of the All India Rice Exporters Association.

Rice output in India, the world's No.2 producer, stood at 104.40 million tonnes in the crop year to June 2013, more than sufficient to cover demand for its 1.2 billion people.

Summer rice crop had been estimated at about 92 million tonnes this year, on par with the previous crop year.