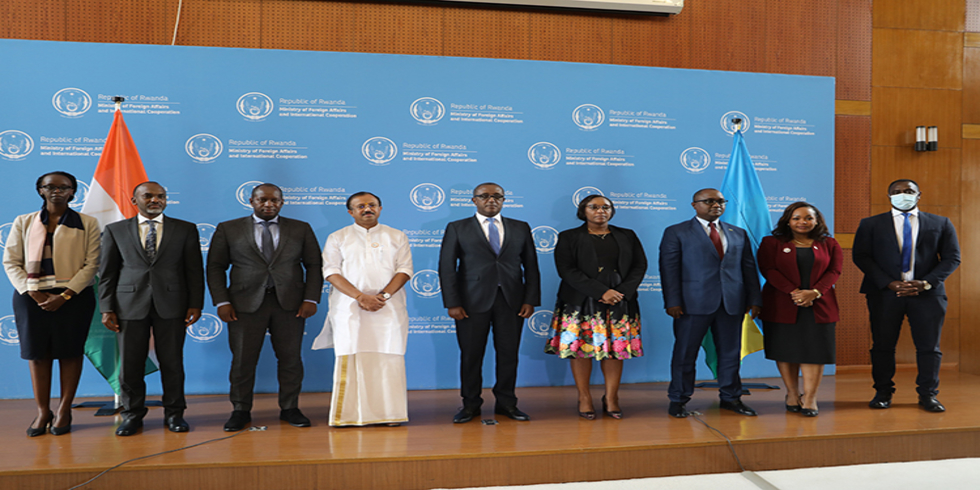 Rwanda and India signed a number of pending agreements, as the two countries look forward to resuming momentum in their bilateral relations.

The agreement was signed on behalf of their respective countries by Dr Vincent Biruta, Minister of Foreign Affairs, and Shri V. Muraleedharan, Minister of State for External Affairs and Parliamentary Affairs.
The two officials co-chaired the inaugural Rwanda-India Joint Commission Meeting before the signing ceremony, which was attended by delegations from both governments (JCM).
Minister Muraleedharan praised Rwanda's efforts in making the summit feasible, noting that it had already been postponed twice due to the pandemic.
"This has allowed us to assess the success of our bilateral relationship and chart a course for the future," he explained.
According to Biruta, the Rwandan and Indian governments have had close ties for many years.
"It's worth noting that we're strengthening our bilateral frameworks as we pledge to working together to centre and develop a long-term dynamic partnership and reap the full benefits of bilateral cooperation," says the statement.
Biruta informed the press that both countries had agreed to accelerate development, emphasising Rwanda's willingness to complete the signed pending agreements.
The agreements, he added, include a tax avoidance agreement, the repurposing of a $66.6 million line of credit for energy-related projects, a Memorandum of Understanding on technological relations, and tourism, development, and promotion cooperation.
Science and technology, as well as law and justice, are among the other signed pending agreements.
"Rwanda looks forward to welcoming the Republic of India's military delegation to Kigali for the first Joint Defence Collaboration meeting, which will develop stronger defence cooperation."
Biruta also requested that India attend the forthcoming Commonwealth Heads of State and Government Meeting.
"We continue to consult with each other and other concerned partners regarding the new dates of the upcoming Commonwealth heads of state government meeting, and I expect the Republic of India to participate at the highest level in contributing to the preparation of a successful event as we pursue our common interests as Commonwealth nations."
Minister Muraleedharan has spent the last two days in Rwanda. President Paul Kagame met him at Village Urugwiro on Monday afternoon before escorting him out later that day.
Rwanda and India have bilateral ties in infrastructure, aviation, investments, health, and energy.
Other areas of collaboration include information and communication technology (ICT), tourism, education, and defence and security.