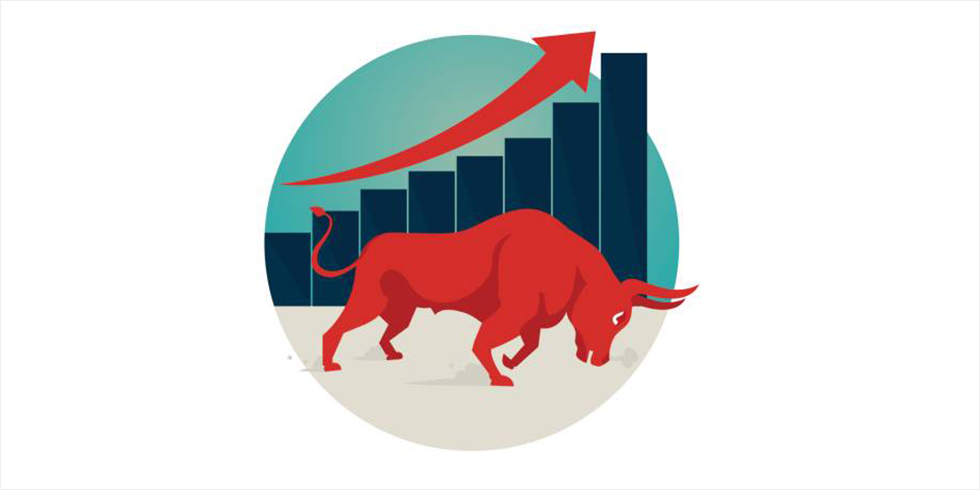 Benchmark indices continued to gallop on Wednesday as traders sidestepped the concerns over the Omicron variant of the virus. The dovish tone of RBI after its policy meet also boosted morale.

All sectors saw buying throughout the day. Banking names continued their rally, while metals also maintained the momentum. Media and realty stocks were in good demand as well.
The 30-share pack Sensex climbed 1016.03 points or 1.76 per cent to close at 58,649.68. In the last two sessions, it has rallied nearly 1900 points. Its broader peer NSE Nifty advanced 293.05 points or 1.71 per cent to 17,469.75.
Courtesy of the massive rally, investor wealth reflected by the total market cap of BSE rose by Rs 4.02 lakh crore. In the last two days, investors have made Rs 7.5 lakh crore.
“Fears over Omicron faded as recent reports suggested that the new virus isn’t as deadly as earlier anticipated and this helped the market to add-on to recent strong gains. The market turned positive over RBI’s continued accommodative stance and MPC kept the rates unchanged,” said Vinod Nair, Head of Research at Geojit Financial Services.
Market at a glance:
RateGain IPO subscribed 65 per cent, Shriram Properties 77 per cent
Hindalco Industries extends its gain, up another 3 per cent
RIL adds 2 per cent on $2 billion deal with an UAE energy giant
India VIX, the barometer of volatility, eases 7 per cent to 17.26
RattanIndia Ent. jumps 5 per cent as its associate opens 3rd EV outlet
FACTORS DRIVING MARKETS
Drugmakers well prepared: British drugmaker GSK said on Tuesday its antibody-based COVID-19 therapy with U.S. partner Vir Biotechnology is effective against all mutations of the new Omicron coronavirus variant. Also a South African study on Tuesday suggested that booster doses of the COVID-19 vaccine produced by Pfizer Inc and partner BioNTech could help to fend off infection from Omicron,
Yields inch lower: The benchmark U.S. 10-year Treasury yield edged a little lower on Wednesday, but after two days of gains on better news about Omicron. It was last at 1.4614 per cent, well up from Friday's recent low of 1.335 per cent when Omicron worries first hit, but also well short of its pre-Omicron recent high in late November of 1.693 per cent. The two-year yield, which rises with expectations of higher interest rates, was at 0.6892 per cent just shy of its recent top.
Broader market
Among the bluechip names, Bajaj Finance was the top gainer, rising 3.62 per cent. Maruti Suzuki, Hindalco Industries, SBI, Bajaj Finserv, Britannia Industries and Asian Paints were other gainers.
HDFC Life NSE -0.47 %  Insurance was the top loser in the Nifty pack, falling 1.17 per cent. Kotak Mahindra Bank, Power Grid, Divi’s Labs and Indian Oil were others that ended in the red.
Broader market indices ended higher, trading in line with their headline peers. Nifty Smallcap gained 1.83 per cent and Nifty Midcap advanced 1.61 per cent. Nifty 500, the broadest index on NSE, ended up 1.61 percent.
Balaji Amines, Zensar Technologies, Route Mobile, Indian Bank, Mindtree and Adani Total Gas were top gainers from mid and smallcap indices, climbing in the range of 4-8 per cent.
Whirlpool of India, Container Corporation, Torrent Power, MMTC, Thyrocare Technologies and Carborundum Universal were major losers from broader market space, falling in the range of 1-5 per cent.
All sectoral indices ended with gains. Nifty PSU Bank climbed the most at 2.57 per cent. Nifty Media and Nifty Auto were among those that added over 2 per cent each as well. Nifty IT and Nifty Bank were also among major gainers.
Market breadth was in favour of gainers as 2,329 stocks ended in the green, while 948 names settled with cuts. As many as 224 securities hit 52-week highs, mostly from the smallcap space. Meanwhile, 14 names hit 52-week lows, mostly from the microcap space. About 425 stocks hit upper circuit limits and 160 lower circuit limits.
European markets were trading mixed. London-based FTSE was up 0.35 per cent while Paris and Frankfurt declined 0.18 per cent and 0.37 per cent, respectively. In Asia, barring Singapore that declined 0.16 percent, all markets closed with gains.