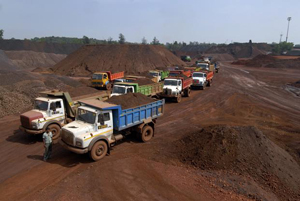 Mumbai: India's iron ore exports are set to increase as Goa prepares to auction unsold stocks, following the easing of a ban on sales of the steel-making raw material.
“Bids will be invited for about 15 million metric tonnes of inventory that’ll be offered through online sales starting next month,” Goa’s mines director Prasanna Acharya said on Wednesday in a phone interview. “The buyers will be allowed to ship the ore overseas or sell locally,” he said.
India’s top court in November had allowed sales of mined ore in Goa, while continuing the ban on extraction because of environmental concerns. Goa was the nation’s biggest iron ore exporter before the ban was imposed in September 2012.
“Goa’s mines department has sought applications from prospective bidders and we hope to have the first auction early February,” Acharya said. “There’s no timeline for completing the sale of the entire quantity.”
The revival in Goa’s exports comes as iron ore shipments from India are poised to tumble for a fourth year to less than 10 million metric tonnes in the year ending March from 18 million tonnes a year earlier. Government curbs, mining bans and higher export taxes are prompting buyers to secure the raw material from other producers, Federation of Indian Mineral Industries’ secretary general R.K. Sharma said on 2 January.
Sesa Sterlite Ltd, which owns its biggest iron ore mine in Goa, and rival miners mainly export their low-grade produce to China as steel makers in India mostly lack the ability to process poor quality ore.
Sesa Sterlite rose as much as 2.3% to Rs.197 and traded at Rs.196.40 as of 2:27pm in Mumbai. The benchmark S&P BSE Sensex rose 1.1%.