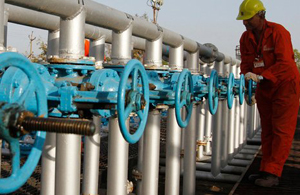 A unit of India’s state-run Oil and Natural Gas Corporation said on Monday that it would pay $2.64 billion in cash for a minority stake in a natural gas project in Mozambique, the latest example of how Asia’s biggest emerging economies are zeroing in on Mozambique’s vast offshore energy resources.

ONGC Videsh, the overseas unit of the Indian company, said it would acquire a 10 percent stake in Mozambique’s Offshore Area 1 from Anadarko Petroleum, which is based in Texas. Andarko will retain a 26.5 percent stake and remain the operator of the project, which includes investments from Japanese and Thai companies and two other Indian companies, as well as Mozambique’s state oil company.

The discovery in recent years of tremendous amounts of recoverable natural gas in the deep waters of the Indian Ocean off Mozambique’s coast has drawn billions of dollars of investment from state-run and private companies in energy-hungry developing nations in Asia.

“Area 1 has potential to become one of the world’s largest L.N.G. projects,” Sudhir Vasudeva, the chairman of ONGC Videsh, said in a statement on Monday, referring to liquefied natural gas. He described the deal as a significant step “toward the energy security of our country.”

In June, ONGC Videsh teamed up with Oil India, another state-run company, in a $2.48 billion deal to acquire a separate 10 percent stake in the Area 1 project from Videocon, a privately owned Indian conglomerate.

Area 1 covers about 2.6 million acres, or 1 million hectares, of ocean floor and contains estimated recoverable reserves of 35 trillion to 65 trillion cubic feet of natural gas, according to Andarko. Investors expect that the first shipments of liquefied natural gas from the project will begin by 2018.

Exploration and production of a separate block, known as Area 4, is being led by the Italian oil and gas company Eni. In March, China National Petroleum Corp., a state-owned company, agreed to pay $4.3 billion for a 20 percent stake in the Eni project, which is also being backed by the Mozambique state oil company Empresa Nacional de Hidrocarbonetos de Moçambique; Korea Gas of South Korea; and Galp Energia of Portugal.

In their announcements on Monday, ONGC Videsh and Anadarko said the transaction remained subject to government and regulatory approvals in India and Mozambique, and was expected to close by the end of the year.

Bank of America Merrill Lynch is the financial adviser to ONGC Videsh on the deal and Simmons & Simmons is the legal adviser.