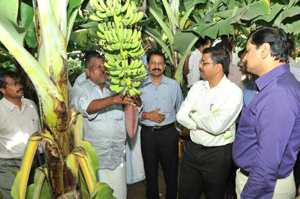 Massive plans are on to export 10,000 tonnes of banana to the Gulf countries from the district, according to Agricultural Production Commissioner Sandeep Saxena.

Inspecting hybrid banana farms in Chinnamanur near here on Thursday, he said that the quality of banana being grown in the district was very good and the fruits were uniform in colour. Moreover, their shelf life was also long and the fruits met all requirements for export.

While taking steps to tap export markets, measures were being taken to expand the area under tissue-cultured banana cultivation to 10,000 hectares from the present 6,000 hectares to meet the growing demand, he added.

The State government had allotted Rs.1.2 lakh crore for agriculture development under its Vision 2023 Plan, according special importance to 10 crops including banana. All required technologies and advanced crop management techniques would be offered to farmers to boost production and scale down production costs.

With effective propagation of drip irrigation system among banana growers, almost all of them in the district had switched over to drip irrigation. Such facility had scaled down use of fertilizers, reduced maintenance costs and cut down weed growth in farms. Moreover, the use of water too reduced substantially. All required inputs reached the root directly and it protected soil fertility.
Form clusters

The Commissioner also advised farmers to form banana clusters to produce banana on a large scale and to enable buyers to procure banana from one spot. Moreover, clusters could handle bulk orders easily and ensure instant supply of large quantities of banana in uniform quality and size. Cluster members would get more assistance under the National Horticulture Mission. Ultimately, profit margin would go up if they sold their produces through clusters, he advised.

Horticulture Commissioner Satyapradha Sahu said that Theni district topped in the State in banana production and stood in the seventh place as far as total area under banana cultivation was concerned.

Collector K.S. Palanisamy said that the government had constructed a banana processing and ripening chamber to process banana at source.

Besides, seven private processing centres too have been functioning to meet the growing demand.

Earlier, banana growers had sent the raw banana to Bangalore for ripening. Some progressive farmers had been exporting hybrid banana to Singapore and Central Asian countries, he added.