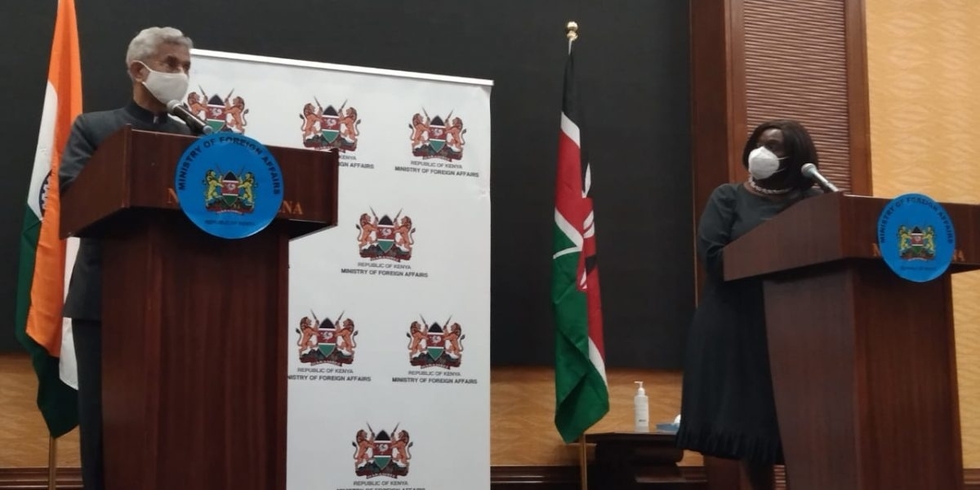 External Affairs Minister S Jaishankar, who was in Kenya for three days, stressed that India's strategy was driven by PM Modi's ten principles for engaging Africa, which he outlined in July 2018. He stated that Africa's goals will continue to be the most important aspect in India's bilateral relations.

In a joint statement published during EAM S Jaishankar's visit, the two nations praised their warm and historic connections, which are based on shared values and strong people-to-people ties stretching back centuries. Both Ministers expressed a willingness to deepen bilateral collaboration under the Kenya-India Joint Commission Framework.
This demonstrates their dedication to the partnership playing a larger role in regional and global contexts. They will continue to reinforce their ties through controlled and methodical interactions.
Recognizing the travel constraints posed by the Covid-19 situation, both parties encouraged expanded bilateral meetings on areas of mutual interest, either physically or digitally, in order to sustain momentum in relations.
As a result, he acknowledged Kenya's Big Four Agenda on Manufacturing, Affordable Housing, Universal Health Care, and Food Security, emphasising that India will strengthen its collaboration in these areas.
Both parties reaffirmed their strong commitment to South-South Cooperation and expressed confidence that their bilateral cooperation will serve as a model in this respect. The two sides discussed bilateral development cooperation and decided to work together to strengthen partnerships by exploring further possibilities in the government and business sectors in the areas of health, environment, ICT, tourism, higher education, automotive, defence, and security.
The two sides highlighted the recent increase in bilateral trade and discussed the possibility to boost trade volumes and value even further. They agreed that trade diversification and new areas of collaboration would be consistent with their tighter partnership. Specific actions in this respect will be considered at the Joint Trade Committee's upcoming meeting.
The conference recognised India as a major source of Foreign Direct Investment in Kenya. Kenya welcomed further private sector investments from India, notably in manufacturing, agro-processing, medicines, automobiles, and affordable housing.
In the health sector, both parties welcomed continued negotiations on creating Joint Ventures in pharmaceutical production, noting that this will help to increase the availability of inexpensive medications. They decided to look into the possibility of expanding their collaboration in healthcare delivery.
The two parties agreed to look at opportunities for collaboration in the environment and forestry sectors, such as green growth, forest resource management, solid and water waste management, climate-smart agriculture, and agricultural value chains.
The Kenyan side expressed gratitude for India's ongoing support in the education sector, including scholarships, capacity-building courses, and infrastructure development, as well as India's pledge to explore expanding the number of scholarships provided to Kenya depending on national priorities.
The Kenyan government welcomed the External Affairs Minister's goodwill gesture by attending the launch of the newly refurbished Mahatma Gandhi Memorial Library at the University of Nairobi. It is worth noting that the refurbishment was made possible by the Indian government's substantial financial help.
Both parties expressed pleasure with their continued cooperation in the United Nations Security Council for the 2021-2022 period. They reiterated their commitment to a rules-based multilateral system and emphasised the United Nations' critical role in tackling global issues. The two sides discussed global and regional concerns, particularly the security situation in the Indo-Pacific region and the Horn of Africa.
The two nations agreed that the fourth Joint Commission meeting will be conducted in India at a date to be determined through diplomatic procedures.