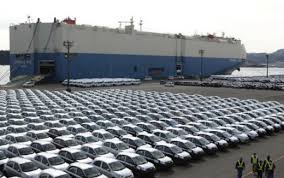 The automotive sector has been under tremendous pressure, with passenger vehicle sales declining 5% during the April-October period. Do you anticipate recovery?

The current slowdown is too long. We are in the month of November and everything has been negative so far from the beginning of the current calendar year. This is the first time since 2002 that the industry is passing through such trying circumstances. Given the fact that auto industry, in particular, has a multiplier effect it becomes even worse. The government needs to take both short and long term measures. For the next six to nine months there will be problems, the recovery may happen by the end of the calendar 2014.

Is there any slowdown on the company’s plans?

We are investing $1 billion at Sanand in Gujarat. Our suppliers are also investing. The fundamental story in terms of organic demand is still there. With our Ecosport success, we have learnt that the demand is there, our total order book is more than 61,000 units of which we have delivered 26,000 units. If you have a great product proposition then there are buyers, and they are buying at the premium end. Even in these difficult times our domestic and export volumes together was the highest ever in the history of Ford in India in October.

With the Sanand facility seeing completion in 2014, you will have additional capacity. Are you looking at exports?

India will be one of the global export hubs for Ford with regard to small cars and the low-displacement engines. This will help us buck the slowdown issues in one market even as we cater to the other. A part of that strategy requires being more flexible and nimble in our manufacturing.

We will export to 50 countries from the present 37 once the Sanand facility is ready by the end of 2014.

Chennai and Sanand will be able to build different body styles, different engines, different power trains on the same line. That’s a very deliberate part of our strategy. It will also help us build scale.

Which are the newer markets in the company’s radar?

At present we are focused on Asia Pacific, West Asia, Africa and South Africa. Going forward we will include more mature markets such as Australia, New Zealand, and Europe.

What will be Ford’s export component once the new facility starts operation?

Are you seeing a moderation in Ecosport sales after the launch in June 2013?

Ecosport has been a success for us. Our total order book is more than 61,000 units of which we have delivered 26,000 units. We’ve had made $142 million investment for giving flexibility to export Ecosport to all markets. The advantage we have is the one Ford plan, which leverages the Ford asset globally. Ecosport is a global platform. There is no moderation in sales.

Will you replicate Figo and Ecosport kind of product developments here?

The product-led development will continue. We have had engineers who worked on Figo and the Ecosport, who now work on global platforms.