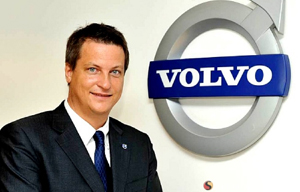 The car manufacturing division of the Swedish auto firm Volvo was in a quandary whether to exit India operation in 2011, just then it realised to reorganise its strategies including the focus on Tier-II markets that paid off, says a BS report.

The report said that back n 2011, Volvo Auto India was in a dilemma whether to leave the country as it couldn't gain a foothold in the Indian market as it wanted to be in contrast with its global competitiors, who had already tasted success. Realisation dawned in, as the Swedish car maker found that its strategies need to be reworked, including its focus in Tier-II markets, noted the report.

Tomas Ernberg, Managing Director of Volvo Auto India told the daily: "We are back on track and believe that India is a key market for us. What is more, we will play a key role in the premium car segment in the country. We are aiming at a market share of 15 percent by 2020".

The official told the daily that some of the lessons, which were learnt in India, especially penetrating Tier-II towns, would be replicated to global markets. Apart from introducing new models of cars in India, Volvo Auto India is also contemplating on introducing its own financial division to boost its growth.

To a pointed question as to how does he see India as a market, Ernberg said: "India is an underdeveloped market. It has a long way to go. Humungous opportunities exist for car makers like us. What is more, we have taken India as a serious market".

Stating that in 2011, Volvo Auto India was not doing well in the Indian market, while its competitors doubled and even tripled their sales, the official went on to add: 'We asked ourselves what are we doing here in India and should we leave the country. We were stuck in the middle, only to realise that we need to change the strategy. When we did that, it reflected positiely in our sales", Ernberg said.

In 2012, Volvo was the fastest growing car maker in the luxury segment in the country, he said and added that the company sold 810 units this year, up from 325 units in the year ago period, a whopping 155 percent increase. 'In 2003, we have resolved ourselves to sell in excess of 1,200 cars', he asserted.

Ernberg said that the company looked at India as a long term investment, adding that the Indian car market would scale 20 million units by 2020, while the luxury car market would account for 15 percent or 150,000 premium cars in India. 'This is more than the total industry in several European nations such as Sweden, which is 125,000 units a year market', he revealed.

When asked as to what were the strategies that aided Volvo Auto India last year, Ernberg said the focus on Tier-II markets and increased visibility programmes did the trick.

For example, in Hyderabad, he said, Volvo's market share was in single digit back in 2011. 'We set a benchkark of 12 percent and in order to achieve that target, we had conducted significant brand building and customer relaed initiatives including new IT infrastructure to connect with its patrons and more customer engagement programmes including touch points in restaurants, night clubs, polo, golf, road shows and others. All these initiatives kept us in good stead, resulting in our market share during 2012 showing an upward tick of 22 percent.

If that was a surprising factor, we have also overtaken Audi and Mercedes-Benz in this city. Having said that, we are now taking this learning across the country and even Sweden took notice of this. Our headoffice is studying whether the same can be implemented in Belgium market as well", Ernberg said.

While elaborating on the brand image, the official admitted it was still pretty much low in India. 'While our marketing budget had doubled, it is stil less, when compared to the German car makers in the country. We spend 5-6 percent of our total turnover on marketing, in contrast with 2.3 percent by other firms', he said.

Ernberg said the year 2013 would see many launches from Volvo. Initially, the company will launch Volvo V40 Cross Country sometime in May or June this year. The brand will take on the likes of BMW X1 and Mercedes-Benz B-Class.

Since it is a sports wagon, Volvo V40 is aimed at customers who were passionate about venturing into outdoor activities including sailing, golf, tennis, besides the youth of the nation. The car is like to contribute around 15 percent to our overall sales this year. While the price for the model is yet to be firmed up, when compared its rivals, the price would still be tad bit expensive.

We are also looking at launching the financial services division seriously as we would be launching Volvo Finance sometime in 2014-15. Volvo Finance is currently operating in countries such as Sweden and China. 'Earlier we were working with Ford Credit. We called it quits and about 18 months back, we commenced our own captive division", he said.

No plan to enter mass market

As the entry level price for Volvo at the present times is estimated to be around Rs 26 lakh, asked if there was any plans of introducting a new entry level car, Ernberg categorically said: "We have no plans of foraying into the mass market. Rather it is the other way we want to traverse. We will be introducing a slew of luxury car models. Just to give you an idea, we promise a new car in 2020, which will come with an assurance that if you sit in the car, you will not die or get injured. No other car manufacturer offers this guarantee", Ernberg said. Last, but not the least, when the daily asked whether the company had any idea of setting up a base in India, the official repllied in the negative. 'As such it is not in the agenda. Our immediate priority is to come up with a competitive price band for our products', Ernberg concluded.