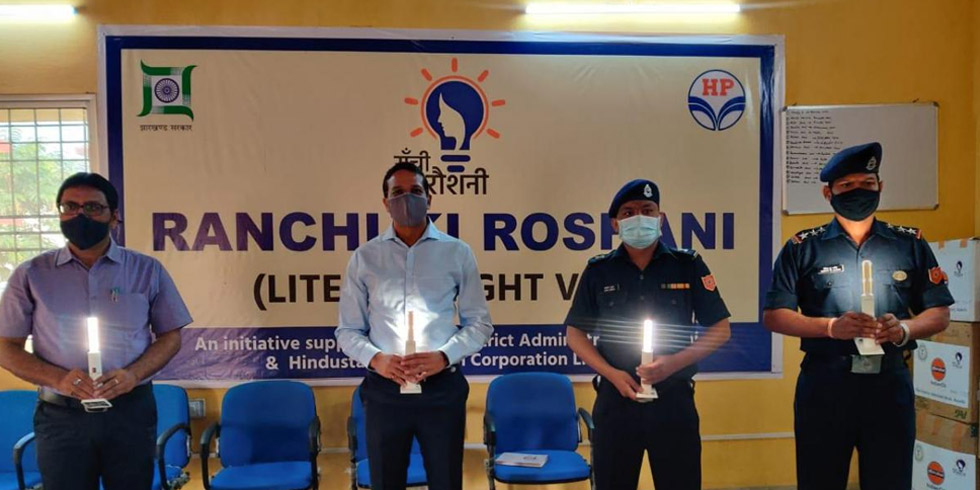 Self-help groups (SHGs) run by women in Ranchi are assisting in the construction of portable solar-powered lamps for the National Disaster Response Force (NDRF), India's premier agency for rescue missions in the event of natural and man-made disasters.

The lamp will help NDRF workers in areas where electricity is inaccessible.

Officials claim a memorandum of understanding was signed with the NDRF for the supply of 40,000 lamps. A consignment of 4,000 lamps was handed over to the NDRF as part of this.

“It is really a matter of pride for Ranchi as the solar lamps prepared by SHG women will be used by NDRF. The conditions in which the NDRF personnel work, it is essential that they must have the facility lights and these solar lamps will really be a great help for them,” said Ranchi Deputy Commissioner Chhavi Ranjan. He also congratulated the SHG women who are engaged in preparing these solar lamps.

“I also express my gratitude towards Indian Oil Corporation Limited that joined us in achieving our target and ensure women empowerment and safety of the nation as well,” said Ranjan.

During the time of a disaster, the NDRF personnel have to face a lot of problems due to lack of power supply and these solar lamps will help them in discharging their duties without any hurdles, he added.

According to Ranjan, the project started in 2018 as part of a skilling and livelihood initiative named "Ranchi ki Roshni," in which women self-help groups were taught how to make LED solar lamps. SHG women in Ormanjhi have set up a full-fledged workshop where these solar lamps are produced.

Surprisingly, over two dozen SHG women involved in the project do everything from soldering to assembling and packing.

“The project was started in 2018, where the SHG women were selected and trained in manufacturing these lamps by the district administration, out of which they are earning around Rs 8000-10000 every month. Besides salary, they are also paid incentives as per their output,” said Block Project Director Mukesh Sinha.

The project is being sustained through CSR funds of IOCL and HPCL, he added.

The idea was influenced by My Shelter Foundation's philosophy of "Liter of Light," which aimed to provide low-cost illumination to the needy. During the day, recycled plastic bottles filled with water and bleach are fitted into the roof to provide illumination.

It was found that though the innovation served well during the day, it was more important to have illumination in the house during night. Hence, a modified version, ‘Light of Liter 2.0’, was created by attaching a battery and a solar panel, making it suitable as portable room light for use at night by a group of IITians while pursuing internship with the district administration for providing a cheap source of lighting for the poor. Later, the project was named as ‘Ranchi ki Roshni.’