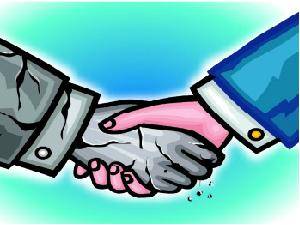 NEW DELHI: India and South African nations are expected to conclude a preferential trade agreement by the end of this year, which aims at reducing tariffs on certain items traded between the two sides.

"Work is in progress (to conclude the PTA)... It is nearing completion as far as I can say. We are expecting it to be concluded by this year end," South Africa Deputy Minister of Trade and Industry Elizabeth Thabethe told reporters on the sidelines of a function here.

She said that Indian Commerce and Industry Minister Anand Sharma and his South African counterpart Rob Davis had agreed to expedite the work for the pact.

In FTA, the two sides reduce or eliminate duties on maximum number of products they trade in, whereas in PTA, the tariffs are not necessarily eliminated, but they are lowered than the countries not party to the agreement.

Thabethe said, "Once the pact will be signed, it would give a further boost to the economic ties between India and South African nations."

South Africa, the latest entrant to BRICS block of emerging nations, has said it expects the bilateral trade with India to reach USD 15 billion by 2014.

In 2012, the bilateral trade between India and South Africa was over USD 14 billion. South Africa's main exports to India are gold, coal, diamonds and platinum, while the its imports from India include auto components and steel.

Further, Thabethe said, the economic relations between South Africa and India are currently driven by a Joint Ministerial Commission (JMC) which was established in 1994.

"The (9th) session of the JMC is expected to convene in 2013, in South Africa which provides a platform to strengthen bilateral relations between the two countries," she said.