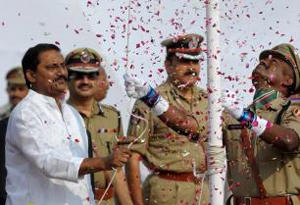 Despite the gradual breakdown of security in West Africa because of poor cooperation between its constituents, trade and commerce are booming between India and the largely French-speaking region, which accounts for 20 percent of the continent's GDP and 30 percent of its population, officials say.

"India's imports from West Africa grew at a robust 45 percent, outpacing the growth of its exports to the region, which stood at 20 percent between 2012 and 2013," according to Ajit Kumar, the chief general manager of India's Export-Import Bank (Exim Bank).

"During April 1996 to August 2013, India's investment in West Africa amounted to $4.668 billion. Cumulative FDI inflow from West Africa to India stood at $31.8 million from April 2000 to July 2013," added Ajit Kumar, who was here for a conference organised by the Indian Council for World Affairs (ICWA) that is supported by the external affairs ministry.

He said the Exim Bank has served as a catalyst for investment in West Africa by extending loans to Indian companies for investing in the region and entering into collaborative programmes. At the individual country level, there has been tremendous growth over the last decade.

According to outgoing High Commissioner to Nigeria Mahesh Sachdev, India's exports to Benin, Cameroun, Chad and Nigeria have tripled since 2008 and have crossed $3.7 billion. At the same time Nigeria has become India's largest trading partner in Africa with bilateral trade doubling in the same period.

By the end of this year, Sachdev said that India is poised to become Benin's largest trading partner in Africa with almost $1 billion while Indian investment in Nigeria would triple to $10 billion. The presence of Indian companies like Airtel, Godrej and Primus is further attracting others to join in the race for West Africa.

The increasing trade in the region is also a pointer that India has shifted away from its "anti-colonial solidarities" and has now based its relationships on mutuality of interests.

"The new priorities are largely shaped by rapid economic growth in India and by efforts towards democratisation, growth and stability in West Africa," Ruchita Beri, a senior research associate at New Delhi-based think tank Institute of Defence Studies and Analyses (IDSA), said.

"An important feature of India's policy towards West Africa is the recognition that the region is an important source of energy. India is the fourth largest energy consumer in the world after the United States, China and Japan.

"In recent years, India has turned towards West Africa in efforts towards diversifying its oil imports. At the same time, India has also supported West African countries' efforts to maintain peace and security in the region," Beri added.

In a similar manner, it has also been noticed that India has moved away from its traditional Anglophone partners.

In 2008, Gulrez said, India committed $5.4 billion towards its engagement with Africa towards capacity building and human resource development,

"The increasing imports from Africa, especially East Africa, have been supported by the duty free tariff preference scheme under which India provides market access for exports from 48 least developed countries, 33 of which are in Africa," he added.

That is not all: India has also demonstrated its interest to partner in the economic development of the West Africa region.

"India and West Africa belong to the semi-industrialised world within which their respective patterns of linkages with the international production process become differentiated," said ICWA research fellow Sandipani Dash.

"While India emerges as a leading resource and market seeking actor, the majority of West African countries relocate themselves in the changing economic geography of the world. The region's quest for favourable capital investment and intermediate, cost-effective technology for revamping its economy coincides with India's requirement of resources and markets to sustain its rising economic growth," Dash added.

In spite of all this, another ICWA research fellow, Nivedita Ray, said that "weaknesses of regional security cooperation has been a key factor in the gradual instability in the West Africa region over the past decade".

"While organised crime, extremist activities and the cross-border movement of arms and fighters have strengthened linkages among non-state actors in the region, state policies have failed to keep up," Ray added.

She noted that the escalation of the crisis in Mali, the rise of Islamic forces in Nigeria and the growing concerns of piracy in the Gulf of Guinea were not being met with the required responses.

Ray was emphatic that "local and regional efforts to mitigate these challenges have been inadequate".

She, therefore, called for a new framework for regional cooperation to address the new emerging complex security challenges.