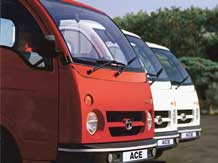 India's motor vehicle exports to Europe, including passenger cars, are likely to be hit badly from January next year when the European Union raises customs duty for import of vehicles from 6.5% to 10%, engineering exporters' body EEPC India has said.

The motor vehicle exports, which currently stand at $1 billion or Rs 6,300 crore, "will be severely affected due to increased competition from other auto exporting countries," EEPC India Chairman Anupam Shah told PTI.

He urged the Indian Government to immediately intervene and raise the matter with EU at the highest level.

The EU step of raising duties on imports follows suspension of generalised system of preference (GSP) through its regulation of December 17, 2012.

Experts feel that the EU has taken this step to push India to take a flexible position in the India-EU Free Trade Agreement negotiation, especially on the auto sector.

The other sectors which will be affected by the EU regulations are aircraft parts, bicycles, ships and boats.

Besides, the duty on aircraft and spacecraft parts will increase from zero at present to 2.7%, according to EEPC India (formerly Engineering Export Promotion Council).

"Since these are high value added items, the duty will have a severe impact and exports worth $600 million will be negatively affected," Shah said.

The present GSP duty for bicycles is 10.5% which will go up to 14% and 15% respectively for two tariff lines. Thus, around $6 to 8 million worth of bicycle exports are likely to be affected.

"South Asian countries like Bangladesh and Pakistan may find it easier to compete and develop this segment, Shah said.

For ships and boats (in tariff lines like dredgers), the MFN (the most favoured nation) rate of EU is zero but in certain other tariff lines, the rate will increase from zero to 1.7%.

Thus, exports to the tune of $400 million will be negatively impacted, EEPC India said.