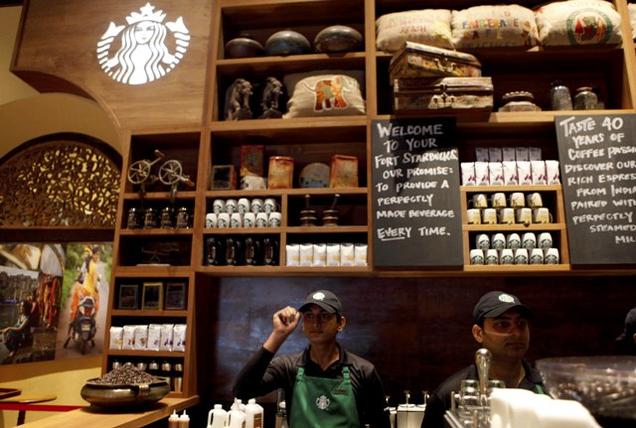 BANGALORE: Opening its first store in south India here, American coffee giant Starbucks on Friday said it is taking the Indian grown coffee to its 19,000 stores across the world.

"In India, the coffee (that) farmers grow...we not only sell the coffee in our stores here in India, but also take that coffee around the world -- around 19,000 stores that we have across different countries we are operating," Starbucks Group president - China and Asia Pacific (Channel Development and Emerging Brands) John Culver told reporters here.

"What we discovered over the last year is, there is very top quality Arabica coffee that is grown here in India. We tested that coffee, we roasted that and we now serve it in our stores as our Indian espresso." He said there is a bigger opportunity to take Indian coffee across the globe "in our stores in other countries. So we are working for doing that -- we are very optimistic about that opportunity and we are very excited about it".

Stating that coffee sold in Starbucks outlets in the country will also be made of Indian espresso, Avani Davda, CEO, Tata Starbucks Ltd, said the company has launched a product- "India Estates Blend" sourced from South India. Tata Starbucks, the 50/50 joint venture between Starbucks Coffee Company and Tata Global Beverages Ltd, opened its 30th store in the market- at Koramangala in Bangalore, adding Bangalore to its list of cities, which includes Mumbai, Delhi NCR and Pune.

The company will open two more stores by the end of the year at Phoenix Market City and Orion Mall at Brigade Gateway in Bangalore.