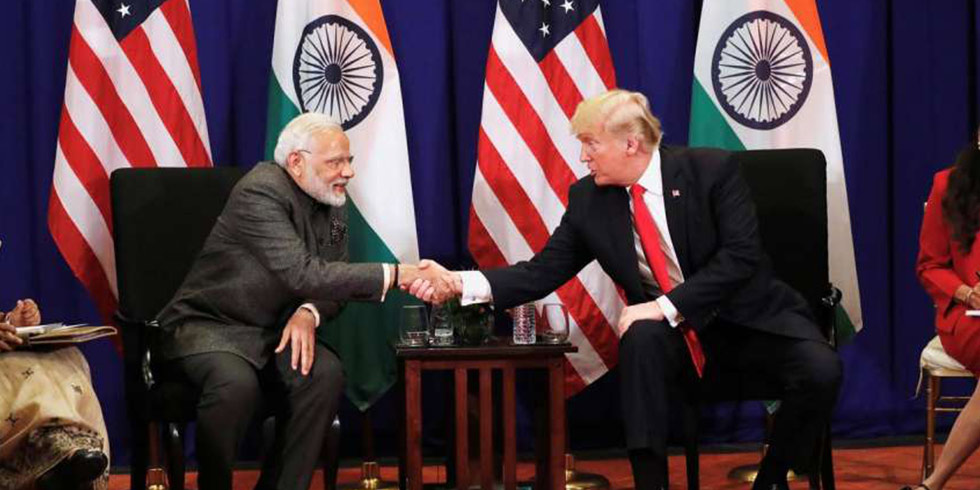 India -US have decided to boost trade in crude oil and liquefied natural gas (LNG) and also strengthen technology partnerships in the energy sector, which will support New Delhi’s plan for $60 billion worth of investments in developing infrastructure for a cleaner, gas-based economy.

Prime Minister Narendra Modi and US President Donald Trump identified energy as a vital part of the strategic cooperation between the two nations, while oil minister Dharmendra Pradhan said India has become the fourth-largest export destination for US crude and the fifth-largest buyer of LNG from the US.
India is looking at the US for energy supplies as part of a strategy to diversify its crude and gas sources to give New Delhi more bargaining power while dealing with traditional suppliers.
“Our strategic energy partnership is growing stronger. This is helping to improve bilateral investments. For oil and gas, the US has become a major source. In the last four years, our total energy trade has been $20 billion. In renewable or nuclear energy, our cooperation is getting new energy," The Prime Minister said , he added further saying that he and Trump have decided to take the relationship to the level of a comprehensive global strategic partnership.
Trump said his term in office has seen energy supply deals with India rising sharply. “Since I took office, our exports to India have almost gone up by 60% and export of high quality American energy by–thank you very much—500%. That is great. As India grows, so does its energy needs. ExxonMobil signed a deal to improve India’s natural gas distribution network so that the US can export even more LNG to India," said Trump.
India’s bilateral hydrocarbon trade has increased exponentially during the last three years to touch the $7.7 billion mark in 2019, accounting for 11% of total two-way trade, Pradhan said during an address later in the day to Indian and US executives.
“Both (energy) secretary Dan Brouillette and I have agreed that there is a need now to develop industry-level engagements for technology infusions as well as investment partnerships in the energy sector," he said. The oil minister said that he and Brouillette have planned their next ministerial meeting in April.
The visit of the US president buttresses the existing crude oil and LNG supply arrangements and major intervention is expected in the sharing of sophisticated technology and equipment for cleaner fuels, mobility, and nuclear energy, according to Jay Cheema, partner at law firm Cyril Amarchand Mangaldas. “An enhanced engagement in the energy sector is the natural corollary of this visit," said Cheema.
India is on a massive expansion of its gas pipeline network, Pradhan said. “We are moving in a big way to a gas-based economy. Now there is a gas pipeline network of 16,000km in India. We are adding another 14,000km. I am not talking about concepts or plans. This additional capacity is under execution. In the next three-four years, this will be added. Now we have gas infrastructure in the west and the south of the country. We are expanding this to the entire eastern part of the country," he said.
India is also making big extension to its capacity to re-gasify imported LNG, which will help boost consumption of the cleaner natural gas, the minister said. “We want to decarbonize the economy. India is an aspirational society. Affordability is our primary concern. Energy access is a priority. We are devoted to clean energy and energy justice to all," said Pradhan.
India has been attempting to diversify its crude oil supplies with state-run oil and gas companies importing crude oil from the US since October 2017. Indian Oil Corp. Ltd. and GAIL (India) Ltd already have a 6.6 million tonne long-term annual LNG import deal with US suppliers. The strategic energy partnership between the two nations seeks to enhance energy security and improve dialogue between industry players in the sector.