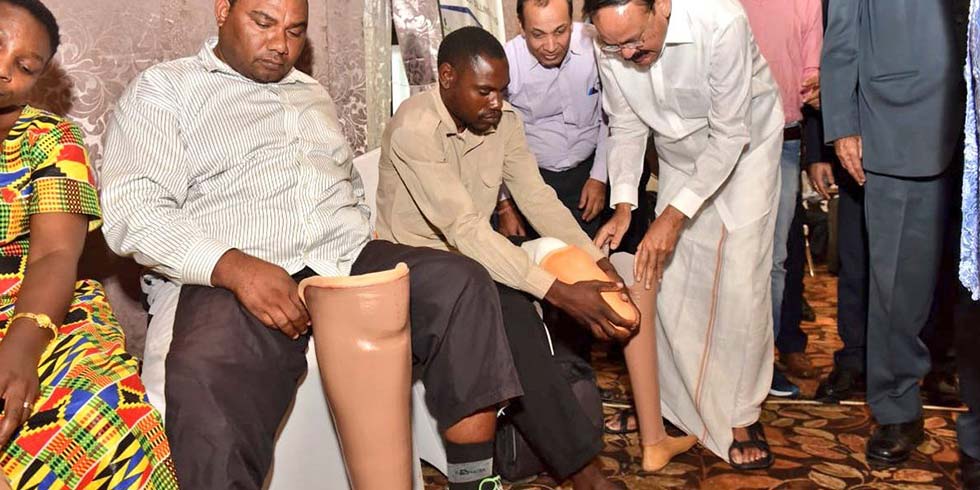 Artificial Limb Fitment Camp has been set up by Bhagwan Mahaveer Viklang Sahayata Samiti (BMVSS), of Jaipur Foot fame, at St Paul’s Hospital in Addis Ababa. The Camp was supported by the Government of India under the ‘India for Humanity’ project.

Dr. Ergogie Tesfaye, Minister of Labour & Social Affairs, Lia Tadesse Gebremedhin, State Minister of Health and Ambassador of India to Ethiopia and the African Union Anurag Srivastava formally inaugurated the camp.
The camp provided artificial limbs free of cost to more than 500 persons with disabilities.
‘India for Humanity’ initiative was launched by the Indian government as a tribute to the philosophy of compassion of Mahatma Gandhi, and to mark his 150th birth anniversary.
Speaking at the inaugural event, Ambassador Srivastava highlighted that India has a large and growing development partnership with countries in Africa, including Ethiopia.
This partnership has a strong humanitarian component and shares experience and knowledge in a spirit of solidarity with these countries which are treading similar paths of socio-economic development, he said.
Ethiopian officials described the challenges faced by persons with disabilities and, in this context, appreciated and acknowledged the efforts of the government of India culmination in this noble initiative which would assist hundreds of beneficiaries regain their mobility, dignity, and in many cases, sustenance.
This event was the second such camp held by BMVSS in Ethiopia. The earlier one in January 2017 was held in Mekelle and at Haramaya University and was very successful, said the Indian embassy in Addis Ababa.
Under India for Humanity project, the Government of India has organized a series of artificial limb fitment camps in several countries including six African nations.