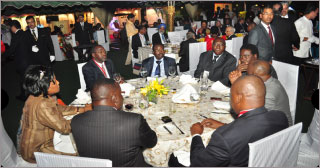 The 9th edition of India-Africa Project Partnership conclave gets underway here March 17, promising to be the largest such engagement with the 54 countries in the continent, with a record 630 registered delegates from overseas.


Co-hosted by the Confederation of Indian Industry (CII) and the Exim Bank of India, the three-day conclave is expected to discuss a host of issues including 475 projects worth $64 billion, mainly in infrastructure and capacity building, the organisers said.


This year, Cameroon is the guest country and Ethiopia the focus country.


Nearly 40 lawmakers, besides a host of industry leaders and officials from 41 African countries are taking part in the meet described by a top foreign ministry official as "the contemporary connotation to an old relationship."


"This highly successful India-Africa business forum, that would not have been possible without the private sector participation, will take the bilateral engagement to a new level," said Radhika Lokesh, joint secretary in India's external affairs ministry.


Together, India and Africa account for a population of 2.2 billion with a combined gross domestic product of nearly $3 trillion. India is Africa's fourth-largest trading partner and a significant investor across the continent


Among the various sessions are those on catalysing larger South-South cooperation, for sustainable power, achieving food sufficiency, building capacity and infrastructure and encouraging Indian private investment in African manufacturing