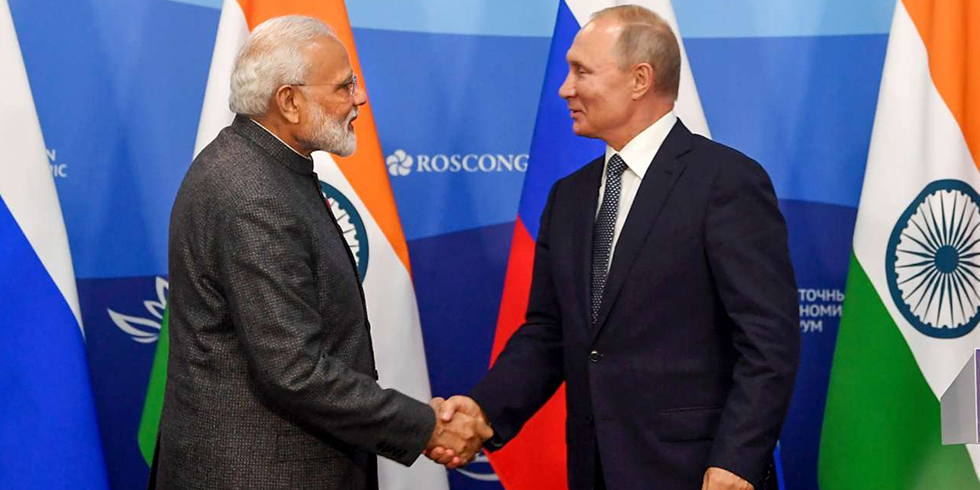 India and Russia are targeting $30 billion of annual trade by 2025, India's foreign secretary said, as a string of energy deals expanding economic ties between the nations.

Seeking to strengthen bilateral trade from its current $11 billion, the two countries announced deals in sectors including energy, defence and shipping after a meeting between Russian President Vladimir Putin and Indian Prime Minister Narendra Modi at an economic forum in Vladivostok.
India, the world's third-biggest oil consumer and importer, aims to raise the proportion of gas in its energy mix to 15% in the next few years and expand its energy supply to hedge against geopolitical risk.
India's foreign secretary, Vijay Gokhale, told a news conference, "We have had a major breakthrough in the energy sector. This is a sector where we are looking to diversify our sources of supplies and we are increasingly finding it attractive to buy oil and gas from the Russian federation,"
Prime Minister , Narendra Modi wants to reduce India's oil imports by 10 percent by 2022, is direct efforts to buy foreign energy assets, taking advantage of low global oil prices and a slowdown in China's overseas acquisitions.
"We are eyeing at investing in additional oilfields in Russia, we are also looking at sourcing LNG," Gokhale said.
Indian companies have stakes in Russian hydrocarbon assets including the Sakhalin-1, Imperial Energy, Vankor and Tass-Yuriakh fields, but it hardly imports oil from there because of logistical constraints and higher freight costs.
Putin wants safe, secure and cost-effective supply channels for India, says Gokhale.
Among the announced deals, India's top gas importer Petronet LNG agreed to buy liquefied natural gas (LNG) from Novatek and invest in the Russian company's future projects. The two companies will also look at connecting markets of the gas as a motor fuel in India.
Indian coal producer Coal India, at the same time, signed a deal to mine coking coal in Russia's Far East, while private company H-Energy is looking at buying LNG from Novatek on a long-term basis.