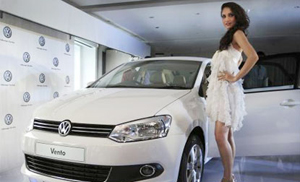 German carmaker Volkswagen is ramping up exports from India and is shipping its mid-sized Vento, a sedan, to Mexico to add to Asian and African markets where it sells cars made at its Pune facility. The company"s Indian arm, which started exporting the left-hand drive Vento to Mexico in October, said the country is already its biggest export market.

"The total units exported so far from Pune are over 27,000 units as of October 2013...Almost every second car from the export volumes is going to Mexico currently...The biggest export market for Volkswagen India is currently Mexico," Mahesh Kodumudi, president and managing director of Volkswagen India, told PTI in an e-mailed interview.

With the entry in Mexico, Volkswagen India is marking its foray into a third continent - North America.

Currently, the carmaker is exporting the Polo and Vento models from India. Volkswagen India began exports in 2011.

"Currently, we are exporting to 32 countries across three continents...We have been adding more markets and hence the number is going up and there is no annual number that can be given," Mr Kodumudi said when asked how many cars are produced annually for exports.

"As of now, up to 20 per cent of the production at Volkswagen Pune plant is for export markets."

About the plant"s output, he said, "For 2012, the production was approximately 96,000 cars from Pune plant. By the end of 2013, we should have similar number, but it depends on how the demand is from the market."

He also said production could be increased, depending upon demand from the market.

"In case there is increase in demand, we have the capacity to ramp-up the production for increased exports," he added.

When asked if the company planned to add more models to the export line-up, he said, "We do not have any plans for other products as of now."

On whether the company planned to enter new markets, he said, "For now, we do not have any more markets decided after Mexico."