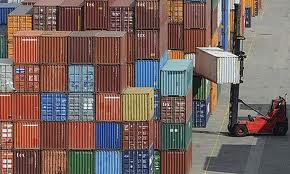 Exports clocked their fastest pace of growth in two years, rising 13.5% to $27.3 billion during October, as demand for goods picked up in the US and Europe and Indian exporters gained from a sharp depreciation of the Indian rupee.

Gold and silver imports fell almost 80% to around $1.4 billion compared to $6.9 billion in October 2012, resulting in trade deficit narrowing to around $10.5 billion, nearly half the level seen a year ago. Oil imports too provided some comfort, rising 1.7% to $15 billion.

Trade deficit has been a major policy headache for the government and investors have raised concerns over financing the huge gap. In recent months, however, with a fall in imports and resurgence in exports, trade deficit is seen to be more manageable, prompting finance minister P Chidambaram to lower the annual estimate for current account deficit to $60 billion or lower, compared to $70 billion projected earlier.