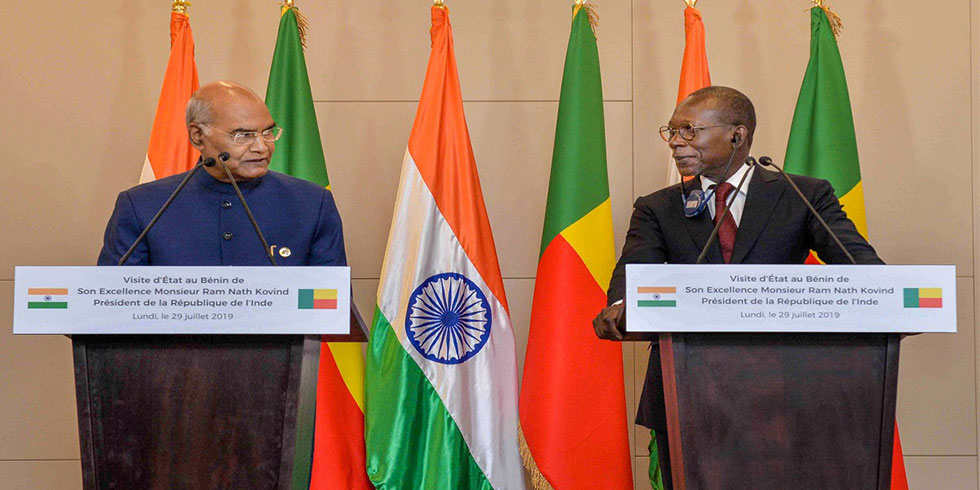 India has extended financial assistance of USD 100 million to Benin with an aim to support the West African country meet its Sustainable Development Goals.

President Ram Nath Kovind is presently on the initial stage of his three-nation visit to Africa, having reached the port city of Cotonou in Benin. He was accorded a ceremonial welcome by his Beninese counterpart Patrice Talon on July 29, following which the two sides held a meeting on bilateral relations.
The two parties signed four agreements and Memoranda of Understanding (MoU). Two MoUs were signed, including an MoU in the field of export credit and investment insurance, and another on the e-VBAB network project, according to the Ministry of External Affairs.
Addressing the National Assembly of Benin, President Kovind said: “We are pleased that we have been able to share our expertise and resources, in whatever manner possible, to support food, energy, water and health security in Benin. We hope to soon complete the up-gradation of Water Supply Schemes in 103 villages in your country through a financing arrangement of USD 42 million.”
The President further thanked the West African country for coming together with India as stakeholders in the International Solar Alliance and strengthen the global fight against climate change and terrorism.
The International Solar Alliance is a group of 121 solar resource-rich countries with headquarters in Gurugram, India. The organisation aims to deploy over 1,000 gigawatts of solar energy and get together more than USD 1,000 billion into solar power by 2030, according to the United Nations Framework Convention on Climate Change (UNFCCC).