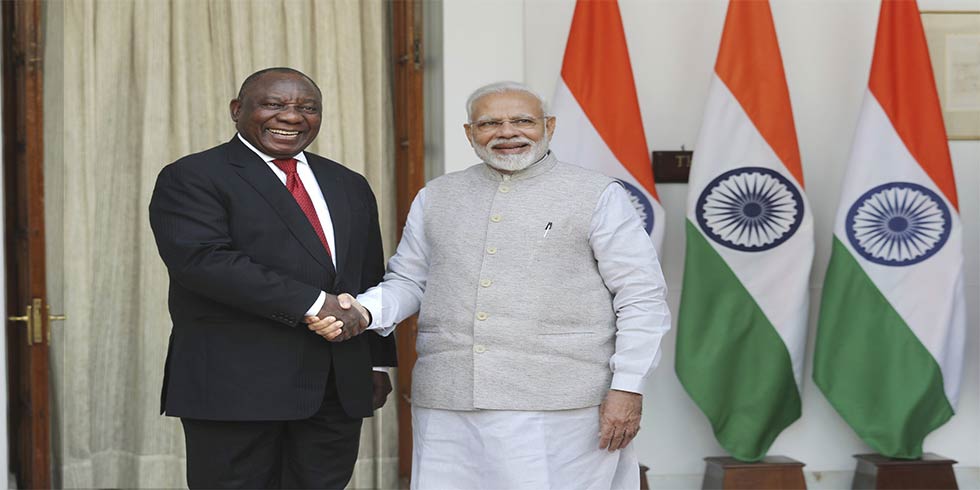 As the investment in African strategic infrastructure assemble pace, India’s role as a strategic partner to unlock potential and growth in African economies is becoming more prevalent.

Indian Prime Minister Narendra Modi said on his recent visit to the continent that “Africa is at the top of our priorities”. While India and African countries have long enjoyed strong bilateral trade relations given our very comparable histories, it’s no surprise that many African countries have developed close cultural, political and economic ties with India.

Primary commodities and natural resources make up about 75% of Africa’s total exports to India, while India’s exports to Africa are influenced by refined petroleum and pharmaceutical products.

Over the past five years these two products have considered for about 40% of total exports into African markets.

Among the African nations, Mauritius is the major country in terms of receiving the highest foreign direct investment, followed by Mozambique, Sudan, Egypt and SA.

Strategic infrastructure investments have changed the route of a country’s economic and social development.

A major focus to organize infrastructural development includes improved road access, such as the 17km Mumbai Eastern freeway and the proposed bus rapid transit system corridor that is due to cover 120km, coupled with technology as fare collection consists smart cards.

Closer to home and on African soil, the absolute scale of the opportunity for investment and related challenges will require a team effort between private investors, governments and development finance institutions.

According to the World Bank, collaborately these partners will need to invest nearly $100bn a year over the next decade to fully obtain the benefits available in the power, transportation, telecommunications, water and sanitation, and irrigation sectors.

Africa entered a level of high growth in the 2000s and countries such as Ethiopia, Kenya, Rwanda, the Democratic Republic of Congo and Angola experienced an economic turnaround at the same time.

Africa quickly became an attractive investment destination for its high rate of growth, a rising middle class and its resource abundance, especially in energy.

Private Indian corporations saw the opportunity and made large investments in many African countries, beyond a multitude of small and medium-sized Indian firms functioning on the continent.

Indian subsidiaries really establishing themselves in their African investment and setting up fully fledged operations, from staff complements to infrastructure.

In terms of financing structures, many Indian corporations have an Africa holding company that runs the financing of the subsidiaries all over the continent.

In most instances we notice a mixture of raising local capital and shareholder loans, so advanced financing structures are starting to develop here, driven by Indian companies, with some taking a step further and looking at an beginning public offering of the African holding company.

Africa-India trade could double by 2021, particularly if suitable steps are taken by government and corporate bodies that want to realise the full prospective and growth benefits offered by the two trading partners.

Indian companies maintain historically strong expertise in the telecommunication, infrastructure, pharmaceutical and agricultural sectors and these are the sectors that require growth and investment in Africa.

The investments that help less-connected economies overcome geographic disadvantages, lower transportation costs and deal in trade will open new opportunities for millions of people living across the continent, which is like the road travelled by India itself.

As compared to other developing regions, the growth potential in sub-Saharan Africa is even greater. About 40% of the region’s population lives in landlocked countries, and many economies are largely obscured from global market centres. Bridging the quantity and quality gaps in infrastructure could rise GDP per capita by 1.7 percentage points each year, excluding SA.

Sustained economic growth in the years ahead is likely to have a positive effect on poverty reduction and consumer markets across both Africa and India.

Doing business in Africa is tough, cyclical and risky. It’s not an “in and out” market. Profitability is realised in the long term, but the profitability is there. Our Indian partners can clearly see the big growth opportunities and are comfortable managing the risk and exposure to realise the return we can offer.

In India, significant infrastructural development has aided economic growth such that it is likely to become the fifth-largest economy in the world in 2019 and has the potential to expand faster than China from 2020 to 2030, regularly increasing its growing global influence. we have every confidence its investment into Africa will continue to boost and rise.