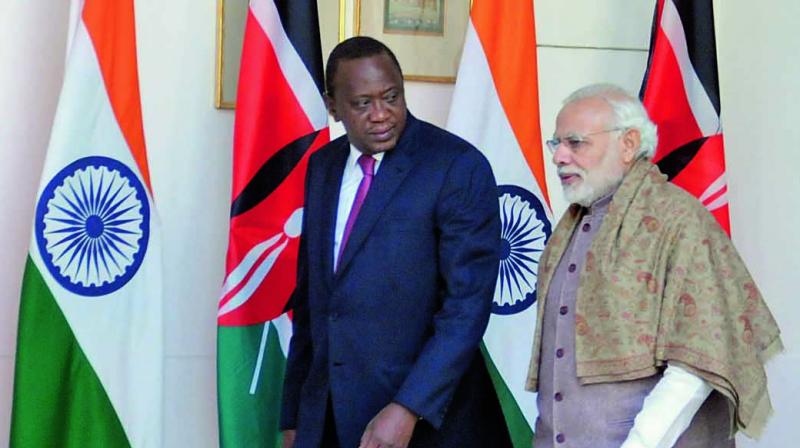 As it seeks to extend it's footprint in Africa where China has already made deep inroads, India has partnered with Japan and the United Arab Emirates (UAE) to implement two high priority projects.  In collaboration with Japan, India will build a hospital for cancer treatment in Kenya while in Ethiopia it will partner with the UAE to set up an information and communications technology (ICT) centre. High level officials have held talks in recent weeks and the details on implementing the two landmark projects are expected to be finalized shortly.

India’s plans have been welcomed by analysts and global economists, given the major forays of China into Africa which has been trending since 2004-05.

India has seen its influence in Africa dwindle since the 1990s, which was once seen as a major political influence in Africa, thanks to New Delhi’s support for the freedom movements in many countries in the continent. However the middle of the last decade has seen a change and India has moved to remedy the situation and reworking its ties with Africa through high-level summits and frequent top level visits.

Chinese investments in Africa between 2005 and 2018 has be pegged at more than $220 billion by a recent study conducted by a Washington-based think tank American Enterprise Institute (AEI) .According to the recet research Nigeria and Angola are major destinations for Chinese investments while Ethiopia, Kenya, Zambia and South Africa follow up the rear end of a strong list. The impact is also supported by China’s ambitious Belt and Road Initiative (BRI) that aims to link China by sea and land with South-East and Central Asia, the Middle East, Europe and Africa.

To counter the influence of China and the BRI, India and Japan have announced the Asia Africa Growth Corridor (AAGC) which is supported by four major pillars guiding the project. These include capacity building and human resource development in Africa, creating quality infrastructure and institutional connectivity, people-to-people partnership, and development and cooperation projects. the new project also covers the  development of capacities to sustain infrastructure, greenfield projects, power grids, agriculture and agro-processing, besides health and pharmaceuticals.

It is not clear whether the hospital in Kenya would be built as part of the AAGC intiative, but it is described as a “trilateral" cooperation venture with Japan, and similarly with the UAE in the case of the ICT centre in Ethiopia.

Given its resource constraints India is seeking partnerships with third countries in Africa. New Delhi has single handedly and quietly undertaken many projects like the Pan African e-network project on tele-education and tele-medicine—that provides “integrated" satellite, fibre optics and wireless network between educational and medical institutes in Africa and India. The project also supports e-governance, e-commerce, infotainment, resource mapping and meteorological services. India’s expertise in skilling manpower, if backed by financial resources and technical expertise from countries like Japan and the UAE, could create quality projects in Africa.

In the case of India and Japan, there is a “mutual interest in doing things together" as both are wary about China’s BRI. Both Japan and the UAE could make use of the political goodwill that India enjoys in Africa, making it a win-win situation for all sides. Ethiopia has become a very big focal point for Chinese investments into East Africa. With India’s ties with the UAE warming up considerably and the UAE looking to invest in India’s infrastructure, it is natural that two countries should look at collaborating in developing industries and regions like Africa.