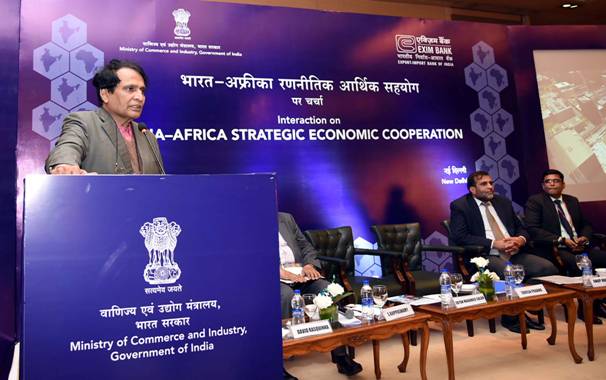 India is making great diplomatic efforts quietly to fill up the untenanted parts of Africa especially East Africa, to ensure that there is an adequate increase in trade to make the Indian governments footprint feasible.

Over the past five years India has taken it's first steps towards discussing a free trade agreement (FTA) or atleast work towards preferential trading agreement with Africa and make it the sole bright spot in exports.

Over the past decade, the exports to Africa from India have gone up by an average of 5 per cent. India had tried to expand its representation in the past during the UPA government in and this process has received an additional boost with the current plans to set up 18 more diplomatic stations across the entire continent. Trade with Africa has generally been a weak point although India has trained generations of army officers and doctors from Africa.

Addressing a conference recently Commerce Minister Mr. Suresh Prabhu said that India's exports of services and merchandise together would touch a record $540 billion reflecting its robust economic fundamentals however India and Africa should examine if they can enter into a free trade agreement or preferential trade agreement. The trade between India and Africa stands at around $62 billion. India mainly exports pharmaceuticals, engineering and electronic products to Africa and imports natural resources and diamonds. While India received record FDI inflows during the last fiscal, the outbound investment flows also seem to be increasing. Analysts predict that Africa would be the preferred destination for Indian investments.

The Commerce Minister also said that there is a huge potential to expand India-Africa bilateral trade flow, towards which India should look to geographically diversify its ties with African countries, as also diversify the bilateral trade basket. There are numerous opportunities for deeper India-Africa bilateral cooperation and partnerships in agriculture and food processing, power projects, new and renewal energy development, skills development, among others. As India gears up to become a $5 trillion economy in the next few years, and a $10 trillion economy thereafter, the country endeavours to help Africa sustain its own economic growth momentum.