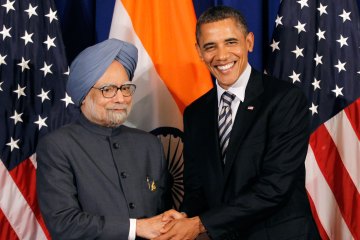 On Friday, he is expected to meet with U.S. President Barack Obama regarding the implementation of the civil nuclear deal, intensifying cooperation in defense, security and economic issues and proposed changes to  U.S. visa norms, which are likely to affect Indian IT professionals.

According to Indian Foreign Secretary Sujatha Singh, the current summit - the third between the allies during the last four years - demonstrates that the U.S.-India relationship has achieved a “stage of maturity.” The two leaders are also expected to discuss the American drawdown from Afghanistan slated for 2014 and the ongoing civil war in Syria.

Singh is also due to address the U.N. General Assembly in New York on Saturday, and is expected to pitch for permanent Indian membership to the bloc’s Security Council. On the sidelines he is expected to meet his Pakistani counterpart Nawaz Sharif.