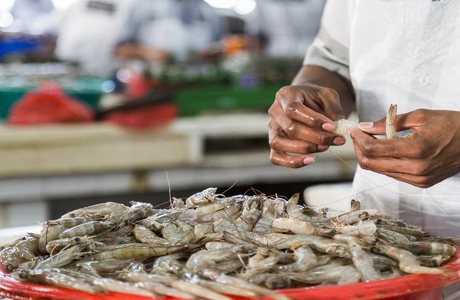 The USA and South East Asia held on to their position as the major in imports from India’s seafood, with a share of around 32 percent and 31 respectively.  "In the face of continued uncertainties in the global seafood trade, India has been able to cling on to its position as a leading supplier of frozen shrimp and frozen fish in international markets," MPEDA Chairman A Jayathilak said.
"With a string of initiatives and policy support, we intend to achieve an export target of USD 10 billion by 2022," he added.
The major contributor for the seafood export was gained by the frozen shrimp, where it held 41.10percent of the quantity of export and 68.46 percent of the earnings. During the year the shrimp export rose by around 30percent in total quantity and 30.1 percent in revenue.
Dried items have seen a growth of around 45.73 percent in quantity and 19.57 in the rupee. USA is the main destination for Indian seafood exports, where the import of seafood worth USD $2320 million has been registered. This has registered the growth of 31percent in quantity, 28 percent in rupee and 33 percent in terms of the dollar.
The major ports in India for export of marine products were, JNP, Kochi, Vizag, Kolkata, and Krishnapatanam. To sum up, in all, Indian ports shipped seafood cargo of 13,77,244 tonnes worth Rs 45,106.89 crore (approx USD7,100 million).