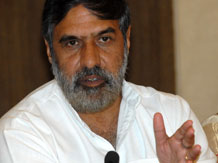 Commerce and industry minister Anand Sharma on Saturday hoped that India’s gross domestic product (GDP) would grow by  5.5 per cent during the current financial year and that exports would be better despite the global slowdown.

“Regardless of the GDP numbers released yesterday (Friday), I am confident that India’s GDP growth will not be less than 5.5 per cent this year” he said while addressing exporters here after inaugurating the new office of the Federation of Indian Export Organisation (FIEO).

Sharma said the country’s economy was facing strong headwinds, but the fundamentals remained strong. “Higher growth is not an option but an imperative for India.”

The minister added every percentage drop in GDP threatens three million jobs and India cannot simply afford to grow at a slower rate.

India’s growth rate for the April-June quarter slowed down to 4.4 per cent, data released on Friday showed.

“An atmosphere of gloom is being created unnecessarily through speculative hammering and we need to overcome this despondency and negativity,” Sharma said.

The minister based his optimism on the export performance and said despite the worldwide recessionary trends, Indian exports managed to touch $303 billion last financial year, almost double from the $167 billion four years ago. Exports have done well in the first four months of this fiscal and forward bookings of exporters are also encouraging, he added. FIEO members expressed confidence of exports touching $325 billion.

Sharma said the government had taken several measures to push merchandise exports to earn foreign exchange. He said special thrust has been laid on bringing down the transaction cost to boost trade efficiency. The minister observed that the $ 1.2-trillion investment planned in the infrastructure sector will go a long way in boosting export performance of Indian companies.