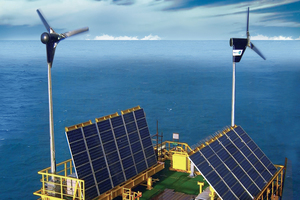 The Indian government has given the country’s booming renewable energy sector a boost. The ministry of new and renewable energy released a draft policy for setting up wind-solar-hybrid plants—where both windmills and solar panels are put up on the same piece of land.

One of the major drawbacks of both wind and solar farms today is that power is produced only during certain intervals—when the sun shines during the day, or when there are strong enough winds, typically during the evening. A hybrid project reduces this variation and power can be generated from a plant nearly round the clock.
“It is a great combination because then you have steady power coming from six in the morning to six in the evening from the solar, and then have wind which starts around 12 and goes on till about two or three in the morning,” said Ramesh Kymal, CEO of wind turbine maker Siemens Gamesa’s India business.
Hybrid plants also allow power producers to tap into multiple energy sources simultaneously and generate more power from a given site. “A new market is emerging… to capitalize on the synergies (of wind and solar power plants across India). Hybrid has become a very important factor in the way forward,” Kymal added.
And this push towards hybrids has come just as the wind energy and solar power sectors in India are stabilizing after a rough year battling policy changes and regulatory issues; even as the country targets renewable energy capacity of 175,000 megawatts (MW) by 2022, up from around 70,000 MW currently.
India is an ideal market for hybrid projects, experts say, given that most states are rich in both wind and solar energy resources. States such as Gujarat, Maharashtra, Tamil Nadu, Karnataka, and Andhra Pradesh have large capacities of both wind and solar power projects.