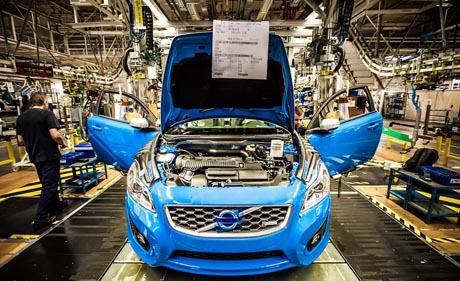 Volvo is planning to locally manufacture majority of its cars in India in the coming 2 years. Currently they’re assembling 2 of their 7 seater SUV cars in India—XC90 and S90, at the Bangalore plant. However, they’re looking forward to start production of another car in later half of 2018. Volvo is all ready to compete with its German rival—Mercedes, BMW and Audi.

XC90 contributes 20% and S90 does 10% in sales. This means 30% of sales in India are manufactured locally. “We would like to produce at least half of our volumes in India by producing a third car.” Said Volvo Car India MD, Charles Frump.

Volvo witnessed 28% yearly growth in volumes, ending the year 2017 with a highest ever sale of 2029. MD says, they’re envisioning that by 2019 the new launch will be electrified and they’d not manufacture internal-combustion-engine only cars.

“Our vision is that, by 2025, we would have launched one million electrified cars globally. This is our shared vision with India as the country plans to achieve e-mobility ambition by 2030. But we feel there is a gap in policy in India. There is no tax incentive for hybrid or plug-in hybrid cars,” he said.