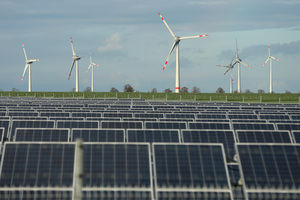 Prime Minister Narendra Modi, at the opening session of the 2018 World Economic Forum in Davos, Switzerland had said that India is taking rapid strides in the renewable energy arena and has successfully met a large part of its green energy generation targets.

India Ratings and Research (Ind-Ra) has published the April report on India’s power sector and his words appear to be making much more sense now.
As power demand increased in March 2018 due to various factors such as inadequate availability of coal, seasonal variations, short-term prices on the exchange surged sharply to Rs 4.02 per unit.
“In March 2018, all India energy requirements increased 6.6% y-o-y to 105.2 billion units (BUs), while available energy increased 6.1% y-o-y to 104.4BUs, leaving a power deficit of 0.8% in March 2018 (March 2017: 0.4%),” Ind-Ra report said.
The rise in demand was met through improved generation from coal-based thermal power (up 5.3% y-o-y) in March 2018.  “The rising power demand is also being met through increasing the generation from renewables. Total renewable generation improved substantially by 30.8% y-o-y to 7.5BUs in February 2018 on account of improved generation from wind and solar sectors, due to higher capacities and marginal improvement in PLFs,” report said.
“The growth in solar power capacity was due to the competitive bidding prevailing in the sector. Wind capacity addition also increased 1.8GW y-o-y to 34.0GW during FY18, of which 1.2GW came in 4QFY18,” the report said.