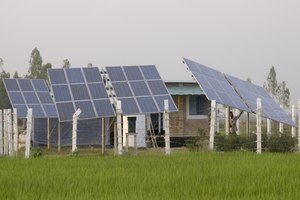 A senior official in the Sheikh Hasina-led government said “In what will give India’s energy diplomacy a boost, power-starved Bangladesh wants to buy at least 2,000 megawatts (MW) of electricity from large solar parks being set up in Rajasthan and Gujarat.

Fostering cross-border energy trade is an important part of Prime Minister Narendra Modi’s South Asia-focused neighborhood-first policy, with India also pursuing long-term deals with Bangladesh companies for supplying domestic cooking gas and other petroleum products.
“Here is an opportunity. Here I see electricity being generated from sunshine and there is darkness out there. So, it’s a question of taking this electricity from here to there,” said Bir Bikram Tawfiq-e-Elahi Chowdhury, an adviser to Prime Minister Sheikh Hasina for power, energy and mineral resources affairs.
He added “It’s a good use of spare capacity and it’s a good use for us so that we have less of our own peaking plants. It’s a bit of a technical challenge for transmitting it over great distance but the engineers must be able to solve it,”
This comes in the backdrop of India’s record low solar power tariff of Rs2.44 per unit registered in May 2017. India, the biggest emitter of greenhouse gases after the US and China, plans to achieve 175 gigawatts (GW) of renewable energy capacity by 2022. Of this, 100GW is to come from solar. Also, as part of India’s strategy of playing a key role in creating a new energy security architecture for its neighbors, 660MW is currently being supplied to Bangladesh.
“We could take up to 2,000MW of solar power if they can provide,” Chowdhury said in an interview on the sidelines of the 16th International Energy Forum Ministerial (IEF—16) held in New Delhi.
“There has been a discussion on this topic. Let's see how this goes forward,” said a senior Indian government official requesting anonymity.
New Delhi sees its eastern neighbor as key to bringing to fruition its plans to quell the insurgency in the North-East, usher in development in the region through trade and strengthen linkages with South-East Asia given Bangladesh’s strategic location.
“Sheikh Hasina’s government is very committed to regional cooperation,” Chowdhury added.
Last year, Bangladesh and India signed two lines of credit worth $5 billion during Sheikh Hasina’s visit to India. During the visit, Modi highlighted energy security as an important dimension of India-Bangladesh ties and promised to add another 500MW under an existing transmission link.
However, there is no consensus yet on the vexed issue of sharing of the waters of the river Teesta between the two countries.
Chowdhury also said that a model on the lines of Adani Group’s Jharkhand thermal power project can be explored in solar energy, where the entire power generated from a power plant is meant for India’s neighbor.
“Some investor may set up a solar power plant, let’s say in Rajasthan specifically for exporting power to Bangladesh. It’s our government’s idea,” said Chowdhury.
Experts welcomed the move.
“It’s an excellent idea to wheel solar power to Bangladesh. This will further deepen energy sector cooperation between countries in South Asia to create an integrated power and gas market that will help in the sustainable development of the region as a whole,” said Debasish Mishra, a partner at Deloitte Touche Tohmatsu India LLP.