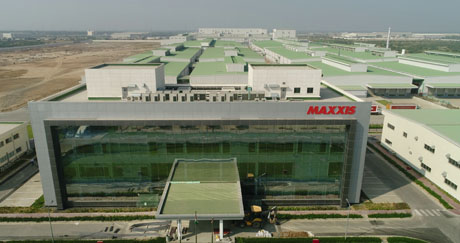 The facility is worth an estimated $400 million (Rs 2,640 crore) and is placed across an enormous 106 acre space. The facility will be dedicated to the production of two-wheeler tyres and tubes and have a production capacity of 20,000 tyres and 40,000 tubes per day. The company aims to grab a substantial 15 percent portion of the market with a 5 year period.

This move will be critical to the company’s plan to establish themselves as one of the top 5 tyre manufacturers in the world by 2026.

“We are fully committed to the government’s Make In India initiative and our intent is to Make In India for the world. We monitored the market for over two decades and then devised the strategy for entering India. The manufacturing plant in Sanand is only the first step of Maxxis’s full range appearance in the country. ” Mr. Cheng-Yao Liao asserted.

On a separate note the Maxxis Group has also committed themselves to the Indian government’s Swachh Bharat Abhiyan, this is backed by the plant’s status as a ‘Zero Discharge Plant’. This status has been achieved due to the plant’s very efficient Effluent Treatment Plant (ETP) and Sewage Treatment Plant (STP).