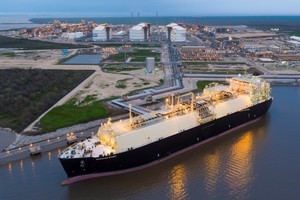 GAIL said in a statement “The cargo has been loaded on-board GAIL’s first chartered LNG ship ‘Meridian Spirit’. The Cheniere Energy’s LNG export facility at Sabine Pass LNG project was where the LNG cargo originated from. The cargo will discharge LNG at Dhabhol terminal of GAIL on or around 28thof this month,”
The ship was flagged off in the presence of GAIL Chairman and Managing Director B.C. Tripathi, Cheniere Energy CEO Jack Fusco, Counsel General of India in Houston, Anupam Ray, as well as representatives from Cheniere Energy and GAIL.
Tripathi said in a statement “With supplies commencing from the US, GAIL will have a diversified portfolio both on price indexation and geographical locations. This long-term agreement would go a long way in strengthening the relationship between GAIL and Cheniere and reinforcing India-US trade ties,”
Under the SPA signed on 11 December 2011, GAIL would purchase around 3.5 Million Tonne of LNG per year from Sabine Pass. “The deal between GAIL and Cheniere aligns with the Strategic Energy Partnership announced by U.S. President Donald Trump during Indian Prime Minister Narendra Modi’s visit to Washington; the two leaders agreed to leverage new opportunities and elevate cooperation,” Barry Worthington, Executive Director at United States Energy Association (USEA) said in a statement.
USEA is the US member committee of the World Energy Council and a United Nation- accredited global energy body with Cheniere Energy as one of its members. “India is trying to increase its use of natural gas. The fuel comprises about 6 percent of India’s energy mix, while its government is taking steps to move the needle closer to 15 percent within five years. As India tries to secure energy supplies and reduce emissions by using more natural gas, the U.S. is a logical energy partner,” Worthington added.
India primarily imports LNG from Qatar and Australia under long-term contracts and has been trying to diversify its natural gas sources. Also, after former US President Barack Obama lifted US’ 40-year-old oil export ban, Indian oil and gas companies -- which have been trying to diversify their crude oil sources -- in response bought shipments of US crude to check for cost competitiveness and its compatibility with Indian refinery configuration.
Cheniere is currently operating and constructing its Sabine Pass LNG facility in Louisiana and is constructing a second liquefaction facility near Corpus Christi, Texas. Cheniere is expected to be the fifth largest global supplier of LNG with the completion of both the projects.